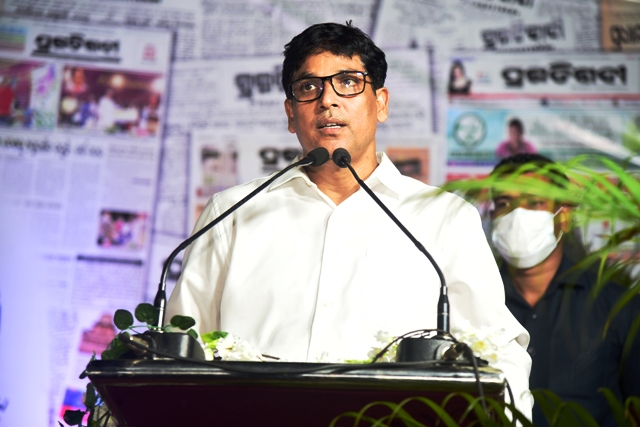 Bhubaneswar: As leading independent Odia daily, Pragativadi marks 50 years of an incredible journey, the celebrations for the Golden Jubilee Year began with the Welcome Function held on Saturday evening.

While speaking on the occasion, State Higher Education Minister said, “Pragativadi stands for high standards of accuracy, authenticity, and the core value of journalism. With the changing scenario in Odia newspapers over the past decades, anything published in Pragativadi is taken as gospel truth by the people of Odisha.”

“Pradyumna Bal was writing to change the downward trend of society, which has the power to make people aware of their rights. As Pragativadi enters its 50th year after independence, are we still in a democratic state and do we need more sharp words to make our stand? Pragativadi is not using sharp words but in my language, I would say that Pragativadi is using refined words to make its stand,” Sahoo said.

“Gandhi Ji is being blamed for the downfall of society and many young people are being inspired by this belief. By putting Gandhi in front of their agenda, every time they are killing the actual ideologies of Gandhi Ji. But Pragativadi always stands with the message that Gandhi Ji left for the society. In every edition, Pragativadi has a message of Gandhi Ji which proves the Father of the Nation’s ideology towards changing the society. Pragativadi is the expression of exploited society,” he said.

“Pragativadi has never come under the influence of a corporate house. It does not matter whether the circulation of the newspaper decreases or increases, Pragativadi had never compromised with its way of propagating news. Over the years, Pragativadi transformed itself into an institution with the moral objectives of Pradyumna Bal. The role of ‘Pragativadi’ is playing instrumental in awakening the social values and contributing to the nation-building process. My hope is that Pragativadi will surely move forward as a refined newspaper as it is now,” he added.

The speakers lauded the role of Pragativadi for its impartial approach to news delivery.

Chairperson of Pragativadi, Smt Saswati Bal presided over the Golden Jubilee celebrations, while the entire event was coordinated by Executive Editor Birupakshya Tripathy and at the end of the ceremony, Director, Mona Lisa Bal, gave the vote of thanks.

Europe Visit Comes At A Time When Region Faces Many Challenges: PM Modi