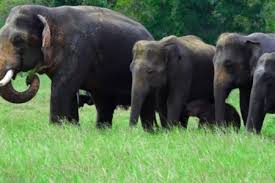 Power Supply Disrupted Due To Jumbo Movement In Kantabanji

According to available information, the herd of jumbos has been invading the villages, causing excessive damages to several houses and crops since the past month. Following this, the locals are living in constant fear of the elephants.

Reportedly, a herd of 30 elephants entered and destroyed crops at Turekela block area of ​​Kantabanji town in Bolangir district. Besides, two days ago, the elephant came from the Malpamunda forest and entered the  Dumerchua village, moving towards the town of Kantabanji. Later, the herd returned to the spot in order to trace a missing jumbo calf.

As a result, the power supply in the surrounding areas, including half the town of Kantabanji NAC, has been disrupted for the past two days.

The power supply has been cut off due to elephants, said SDO, Abani Maharana.

On the other hand, none of the villagers are reportedly leaving the house after 6 pm. The forest personnel patrolling during the night at the city, sources said.

Sanskrit The 5th Most Used Language In Rajya Sabha In…