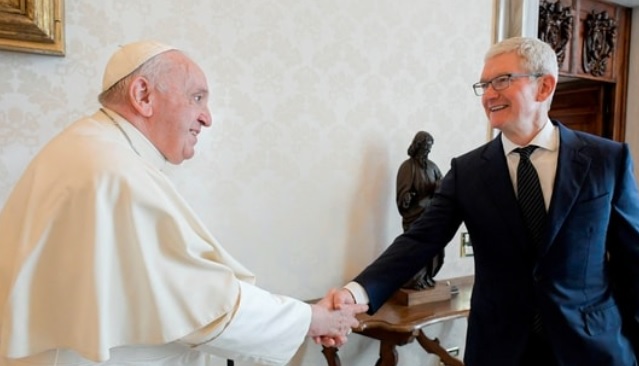 Pope Francis, who has often people to limit the use of their mobile phone, on Monday met Tim Cook, the chief executive officer of Apple, the technology giant which manufactures iPhones.

However, no details of the meeting was disclosed.

In 2016, Cook had met the Pope at the Vatican during a 15-minute interaction. The meeting had taken place a week after the Pope had met Google’s parent Alphabet’s executive Eric Schmidt, according to a report.

Although Pope Francis patiently allows people to take selfies with him, last year, he interrupted his general audience when an aide passed him a cell phone and took an urgent call from a senior Vatican official.

“Free yourself from the addiction to mobile phones,” he told young people in 2019. “When you become a slave to your mobile phone, you lose your freedom.”

“We have to get back to communicate with our families”, he had added.