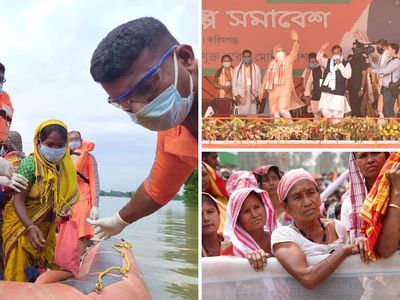 New Delhi: The BJP has decided to put the highly contentious law on backburner for the time such as the Citizenship Amendment Act (CAA) in its manifesto.

The BJP president JP Nadda while releasing the manifesto ahead of Assam polls, has stressed on 10 commitments that will help Assam take the next ‘big leap’ forward.

The poll manifesto of saffron party has promised three lakh jobs to the youth and correction of National Register of Citizens for Assam’s protection. It also promises to tackle recurring floods in the northeastern state as the other main agenda of the party.

Congress on the other hand promised five lakh government jobs and assured that the Citizenship Amendment Act (CAA) will not be implemented in the state.

Assam has a long history of floods. Both, natural as well as man-made factors have been responsible for this problem. Nearly 40 per cent of Assam’s  geographical area is prone to damage by floods. To protect the state from this annual calamity, successive state governments invested heavily in building embankments on rivers.

Illegal migration into Assam is another nagging problem as migration from Bangladesh over several decades has altered the demographic complexion of Assam.

One Kendriya Vidyalaya Student Among Fresh Covid Cases In Bhubaneswar