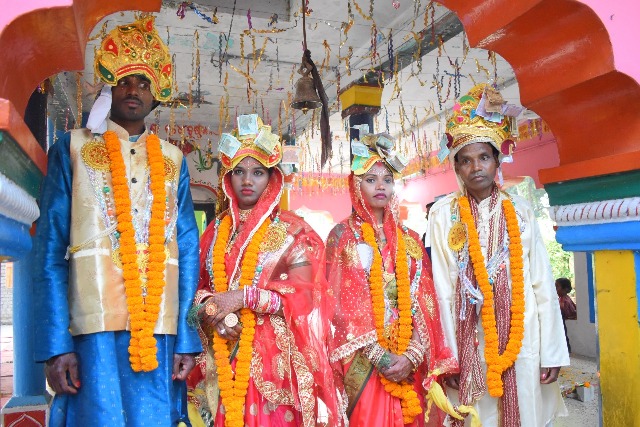 Kandhamal: Two former women Maoists have tied the nuptial knot with their respective grooms at a special event organized by the district police on Sunday.

The police solemnized their wedding at a local Radha Krishna temple near police reserve ground. The ex-maoists named Nandini and Karuna had surrendered before police.

Nandini had given up violence in 2019 while Karuna surrendered before DGP in 2021 with an intention to join mainstream.

Karuna is a resident of Chhattisgarh while Nandini belongs to Tumudibandha area in Kandhamal district.

The district police made elaborate arrangements for the marriage ceremony. Beginning from the altar decoration to community feast, everything was organised by the police.

Nandini tied the knot with Vinod of Daringbadi area while Karuna got married to Swapneswar of G Udayagiri.

Both the brides expressed pleasure over their marriage. They said they returned to the main stream to lead a normal life.

Kandhamal police had earlier imparted them sewing training in a bid to make them self sufficient. Kandhamal SP Veenit Agrawal said that the two former rebels shun violence by fascinating with the government package. Police are taking measures for their empowerment.