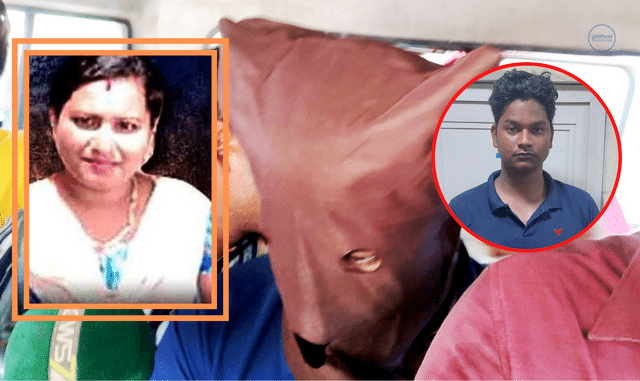 Bhubaneswar: The Commissionerate Police on Friday claimed to have solved the mystery behind the death of Subhashree Mahapatra, who was found dead inside her house in Sashtri Nagar area in the city. Reportedly, police arrested Chittaranjan Jena (25), who had developed an illicit relationship with Subhashree, and recorded his statement.

Also, police have recovered the dupatta with which Subhashree hanged herself. The accused had thrown away the dupatta on the bypass road near Barunei Hills before fleeing to his native village.

Addressing a presser here this evening, Bhubaneswar DCP Prateek Singh said that accused Chittaranjan Jena has been arrested and booked under Section 306 of the IPC for ‘abetment of suicide’ and Section 201 of the IPC for ‘causing disappearance of evidence of offence’. He will be forwarded to the court on Saturday, the DCP said.

DCP Singh stated that the deceased Subhashree Mahapatra (25) a native of Manapur area of ​​Nayagarh district, was married to Ananta Nath of Erasama area of ​​Jagatsinghpur district in 2014. After a few years of marriage, the couple had a son. In the year 2019, Subhashree met accused Chittaranjan Jena (25) of Itamati area of ​​Nayagarh, who was a driver by profession and was staying close to her house. Later on, the relationship between both grew and they met each other most of the time. Even they used to stay at various hotels and guest houses at different times.

However, for the past few days, Subhashree was busy with some work, so she could not give time to Chittaranjan who was very possessive about their relationship. He had also warned Subhashree not to talk to anyone including her husband.

On the 30th of August, Subhashree had gone to Capital Hospital to visit an ailing relative. When Subhashree returned from the hospital, Chittaranjan reached her house in Shastri Nagar and a heated argument broke out between them. Losing his cool, accused Chittaranjan thrashed Subhashree and left for his workplace.

On reaching Subhashree’s house, he saw her dead body hanging and laid her on the bed by untying the dupatta from her neck. In a state of panic, he took the dupatta with him and fled the scene. He then threw it on the roadside near Barunei Hills and absconded to his village.

On inspection of the deceased’s mobile phone, Chittaranjan’s number was ascertained. The actual truth behind the incident came to the fore after the accused was interrogated at Kharvel Nagar police station and confessed his acts, DCP Singh concluded.