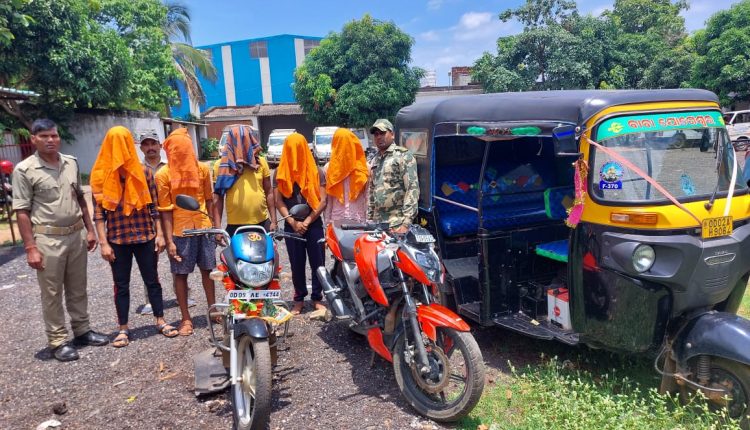 Khordha: Khordha Town police have busted a notorious gang involved in chain snatching & bike lifting with arrest of three persons including a receiver on Saturday.

According to reports, a woman, Preeti Mishra and her friend Laxmipriya Tripathi were on their way to the bank from the new bus stand on a scooter in the afternoon of the 14th of June when the miscreants snatched a gold chain from Laxmipriya’s neck.

Following raids at multiple places, the special squad zeroed in on three members of the gang. The arrested persons have been identified as Kaliprasad Raul (26), Sunil Mansingh (28) and Bibhutibhushan Sahu (32), a goldsmith who used to receive the stolen gold.

The accused persons revealed that they had taken loans by mortgaging seven gold chains with Mannapuram Gold Loan Bank and IIFL Bank. Some other gold chains have been recovered from the arrested goldsmith. Besides, the police have also recovered seven stolen motorcycles from them as the accused were also found to be involved in bike lifting.

Police have also learned that the accused were involved in various thefts and snatching incidents in Bhubaneswar and Khordha areas. All the three accused persons have been arrested and forwarded to the court by Khordha town police.