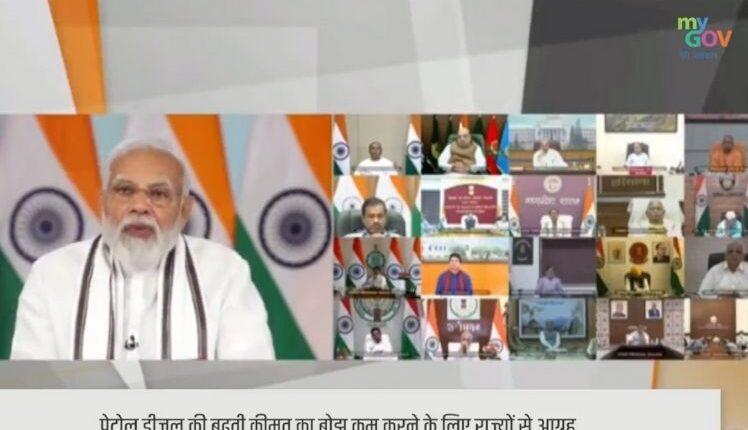 New Delhi: Prime Minister Narendra Modi interacted with the Chief Ministers to review the COVID-19 situation here today and appealed to states ruled by the Opposition to reduce tax on fuel.

Reacting to the issue of rising fuel prices, Prime Minister Narendra Modi has appealed to states ruled by the Opposition to reduce tax on fuel. This was his first reaction to the rising fuel prices. He said the states that did not reduce prices last November should do it now.

The Prime Minister said that in order to reduce the load of petrol and diesel prices the central government has reduced the excise duty and had requested the states also to reduce taxes.

“Some states reduced taxes but some states did not pass on the benefits to the people, leading to higher cost of petrol and diesel in these states. This is not only injustice towards the people of the state but harms the neighbouring states also,” he said.

He said that states like Karnataka and Gujarat undertook the tax reduction for the welfare of the people despite revenue loss while their neighbouring states earned revenue by not reducing tax.

Similarly, the Prime Minister said that last November a request was made to reduce VAT but many states like Maharashtra, West Bengal, Telangana, Andhra Pradesh, Tamil Nadu, Kerala, Jharkhand did not do so for some reason. The Prime Minister said 42 per cent of the revenue at the centre goes to State governments.

“I urge all the states to work as a team in this time of global crisis following the spirit of cooperative federalism”, The Prime Minister requested.

The Prime Minister also pointed out that with increasing temperature, fire incidents in forests and buildings are increasing. He specially asked for the fire safety audits of the hospitals. He said our arrangements for meeting this challenge should be comprehensive and our response time should be the minimum.