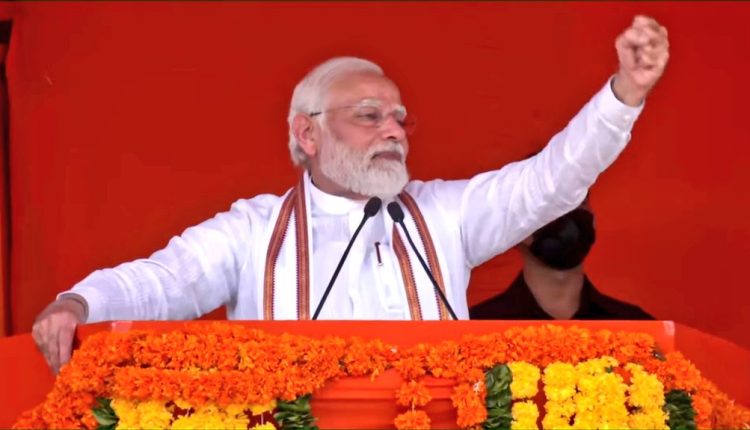 PM Modi To Embark On 2-Day Karnataka Visit From Monday

New Delhi: Prime Minister Narendra Modi will embark on a two-day visit to Karnataka to inaugurate and lay the foundation of a slew of development projects on 20th and 21st June 2022.

According to the Prime Minister’s Office, at around 12:30 PM on 20th June, Prime Minister will visit the Indian Institute of Science (IISc) Bengaluru, where he will inaugurate the Centre for Brain Research (CBR) and will lay the foundation stone of Bagchi-Parthasarathy Multispeciality Hospital. At around 1:45 PM, he will visit Dr. B R Ambedkar School of Economics (BASE), Bengaluru, where he will inaugurate the new campus of BASE University and unveil the statue of Dr B. R. Ambedkar. He will also dedicate to the Nation 150 ‘Technology Hubs’ that have been developed by transforming Industrial Training Institutes (ITIs) in Karnataka. Thereafter, at around 2:45 PM, Prime Minister will reach Kommaghatta in Bengaluru, where he will inaugurate and lay the foundation stone of multiple rail and road infrastructure projects worth over Rs 27000 crore.  Then at around 5:30 PM, Prime Minister will attend a public function at Maharaja’s College Ground, Mysuru where he will lay the foundation stone of the Coaching terminal at Naganahalli Railway Station and dedicate to the nation the ‘Centre of Excellence for persons with communication disorders at the All India Institute of Speech and Hearing (AIISH). Thereafter, at around 7 PM, Prime Minister will visit Sri Suttur Math, Mysuru and at around 7:45 PM, he will be visiting Sri Chamundeshwari Temple, Mysuru.

At around 06:30 AM on 21st June, Prime Minister will participate in a Mass Yoga Demonstration at Mysore Palace ground, on the occasion of the 8th International Day of Yoga.

In a step toward enhancing mobility and boosting connectivity in Bengaluru, Prime Minister will lay the foundation stone of the Bengaluru Suburban rail project (BSRP), which will connect Bengaluru city with its suburbs and satellite townships. The project, which is to be built at a cost of over Rs. 15,700 crore, envisages 4 corridors with a total route length of over 148 Kms. Prime Minister will also lay the foundation stone for the redevelopment of Bengaluru Cantt. and Yesvantpur Junction railway station to be developed at a cost of around Rs 500 crore and Rs 375 crore respectively.

Prime Minister will inaugurate the new campus of Dr B R Ambedkar School of Economics (BASE) University, Bengaluru.  The residential University was set up in 2017 in recognition of the exemplary contributions made by Dr B.R Ambedkar in the development of Independent India and as a tribute to his memory on the occasion of his 125th birth anniversary.

During the Programme at BASE University, Prime Minister will also dedicate to the Nation 150 ‘Technology Hubs’ that have been developed by transforming the Industrial Training Institutes (ITIs) across Karnataka. This unique initiative developed at a cost of over Rs 4600 crore is supported by many industry partners. It aims to create a skilled workforce to address Industry 4.0 manpower needs. These Technology Hubs, through their various innovative courses, will provide high-skill training in cutting-edge technology and improve opportunities for ITI graduates in employment and entrepreneurship.

At IISc Bengaluru, Prime Minister will inaugurate the Centre for Brain Research (CBR), the foundation stone of which was laid by the Prime Minister himself. The Centre is developed as a one of its kind research facility and focuses on conducting vital research to provide evidence-based public health interventions to manage age-related brain disorders. During the Programme, Prime Minister will also lay the Foundation Stone for 832 bedded Bagchi Parthasarathy Multispeciality Hospital. The Hospital will be developed on the campus of IISc Bengaluru and will help integrate science, engineering and medicine at the prestigious institute. It will provide a major fillip to clinical research in the country and will work toward finding innovative solutions that will help in the improvement of healthcare services in the country.

At a public function at Maharaja’s College Ground, Mysuru, Prime Minister will lay the foundation stone of the Coaching terminal for sub-urban traffic at Naganahalli Railway Station which will be developed at a cost of over Rs 480 crore. The Coaching terminal will also have a MEMU shed and will decongest the existing Mysuru Yard, facilitating the running of more MEMU train services and long-distance trains from Mysuru, improving both connectivity and tourism potential of the region.  This will benefit the daily commuters as well as those travelling to long-distance destinations.

During the programme, Prime Minister will also dedicate to the nation the ‘Centre of Excellence for persons with communication disorders at the All India Institute of Speech and Hearing (AIISH). It is equipped with state-of-the-art laboratories and facilities for the diagnosis, assessment and rehabilitation of persons with communication disorders.

On the occasion of the 8th International Day of Yoga (IDY) on 21st June 2022, Prime Minister will participate along with thousands of participants in a Mass Yoga Demonstration at Mysore Palace ground, Mysuru. Integrating the Azadi Ka Amrit Mahotsav with celebrations of the 8th IDY, Mass Yoga demonstrations will also be organised at 75 iconic locations across the country under the leadership of 75 Union Ministers, along with the Yoga Demonstration by the Prime Minister at Mysore. The Yoga demonstrations will also be held by various educational, social, political, cultural, religious, corporate and other civil society organisations and will be attended by crores of people across the country.

Prime Minister’s Yoga programme at Mysuru is also part of the novel programme ‘Guardian Yoga Ring’ which is a collaborative exercise between 79 countries and United Nations organisations along with Indian Missions abroad to illustrate Yoga’s unifying power that surpasses National boundaries. As the sun apparently moves from the east to the west across the world, the Mass Yoga Demonstrations in the participating countries, if seen from any one point on Earth, will seem to be happening one after the other, almost in tandem, thus underlining the concept of ‘One Sun, One earth’. This innovative programme will be telecast live on DD India starting from 3 AM IST (telecast from Fiji)  till 10 PM IST (telecast from San Francisco USA) on 21st, June 2022. As part of the programme, Prime Minister’s programme in Mysuru will be telecast live on DD India from 06:30 AM IST.

Since 2015, the International Day of Yoga (IDY) is celebrated worldwide on the 21st of June every year. The theme for this year’s Yoga Day is “Yoga for Humanity”. The theme portrays how Yoga served humanity in alleviating suffering during Covid Pandemic.

India Vs South Africa: All Set For A Thrilling Final