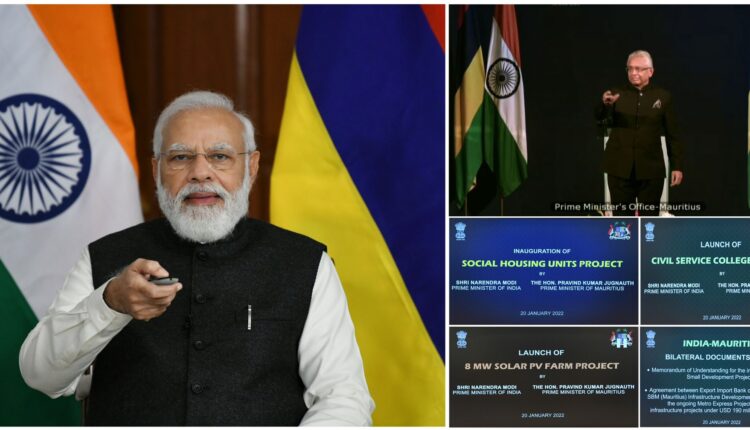 This project has been implemented as part of the vibrant development partnership between India and Mauritius.  On this occasion, the two Prime Ministers also took part in a virtual foundation stone laying ceremony for two other projects  construction of a state-of-the-art Civil Service College and an 8 MW Solar PV Farm also undertaken as part of Indias development support.

The event was held via video-conference.  The event in Mauritius was held in the Mauritian PMO premises in presence of dignitaries including Cabinet Ministers and senior officials of the Government of Mauritius.

Speaking at the occasion, Prime Minister Modi highlighted the vision powering Indias development assistance  defined by the needs and priorities of our friends and respectful of sovereignty, and at the same time enhancing the well-being of the people and bolstering the capacities of the country. Prime Minister acknowledged the importance of Civil Service College project in nation building and offered to share learnings of Mission Karmayogi. Prime Minister recalled the One Sun One World One Grid (OSOWOG) initiative that he put forth at the First Assembly of the International Solar Alliance (ISA) in October 2018 and said that the 8 MW Solar PV Farm project will help mitigate the climate challenges that Mauritius faces through avoidance of 13,000 tons of CO2 emissions.

In his remarks, Prime Minister Pravind Jugnauth thanked India for wide ranging assistance including financial assistance to Mauritius. He noted that under the leadership of Prime Minister Modi the relations between India and Mauritius have attained newer heights.

The Government of India in May 2016 had extended a grant of US$ 353 mn to the Government of Mauritius as Special Economic Package (SEP) to execute five priority projects identified by Government of Mauritius, among others.  These were: the Metro Express Project, Supreme Court Building, New ENT Hospital, Supply of Digital Tablets to Primary School Children, and the Social Housing Project.  With the inauguration of the Social Housing Project today, all the high profile projects under the SEP have been implemented.

The Civil Service College project, located in Reduit, is being financed through a grant support of US$ 4.74 million, under an MoU signed in 2017 during the visit of Prime Minister of Mauritius Pravind Jugnauth to India. Once constructed, this will provide a fully equipped and functional facility for the civil servants of Mauritius to undertake various training and skill development programme.  It will further strengthen institutional linkages with India.

Todays ceremony included exchange of two key bilateral agreements: Agreement for the extension of USD 190 million Line of Credit from the Government of India to the Government of Mauritius for the Metro Express and other infrastructure projects and MoU on the Implementation of Small Development Projects.

Despite the challenges posed by Covid-19, India-Mauritius Development Partnership projects have progressed rapidly. In 2019, Prime Minister Modi and the Prime Minister Jugnauth had jointly inaugurated the Metro Express project and the New ENT Hospital in Mauritius in virtual mode. Likewise, in July 2020, the new Supreme Court Building of Mauritius was also inaugurated virtually by the two Prime Ministers.

India and Mauritius share close ties anchored in our common history, ancestry, culture and language. This is reflected in the privileged development partnership between our two countries, with Mauritius being a key development partner for India in the Indian Ocean Region. Todays event, in line with the spirit of Sabka Sath, Sabka Vikas, Sabka Vishwas, Sabka Prayas, marks yet another milestone in this successful, time-tested partnership.

Excessive cry in small babies must not be ignored, it can be arrhythmia: AIIMS Bhubaneswar Expert