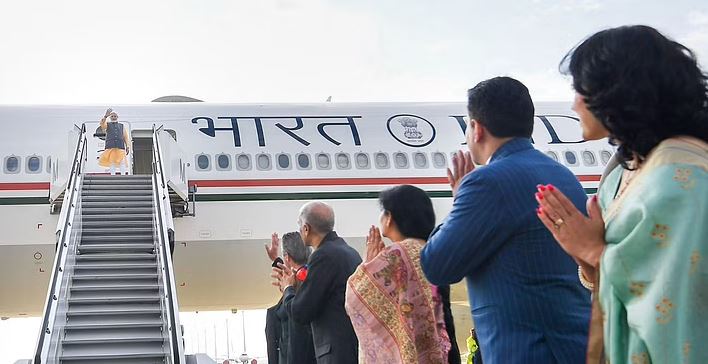 New Delhi: Prime Minister Narendra Modi has left for the United Arab Emirates today after a productive visit in which he attended the G-7 Summit.

In a Tweet message, the Prime Minister said, he is leaving Germany after attending the G-7 Summit.
He interacted with several world leaders and participated in a memorable community programme in Munich. The leaders were able to discuss many issues aimed at furthering global well-being and prosperity, he added.

During his visit to the UAE, the Prime Minister will pay his personal condolences on the passing away of Sheikh Khalifa bin Zayed Al Nahyan, the former UAE President and Abu Dhabi Ruler. He will also congratulate Sheikh Mohamed bin Zayed Al Nahyan on his election as the new President of the UAE.

India and the UAE’s diplomatic relations date back to 1972. The two countries traditionally enjoy a strong bilateral relationship, which will be boosted by the visit of the Prime Minister. The UAE has emerged as an important economic hub not just within the context of West Asia but also globally. The India-UAE total trade merchandise has been valued at 52.76 billion dollars for the first nine months of the fiscal year 2021-22, making the UAE, India’s third-largest trading partner. Many Indian companies have invested in tourism, hospitality, catering, health, retail, and education sectors in West Asia.

Prime Minister Narendra Modi has thanked the people of Germany, Chancellor Olaf Scholz and the German Government for their hospitality during the visit. In a tweet, Mr Modi expressed confidence that the India-Germany friendship will scale newer heights in the times to come.

Prime Minister Modi also met South African President Cyril Ramaphosa. Both leaders reviewed the progress made in bilateral relations between the two countries, particularly following the signing of the Strategic Programme of Cooperation in 2019.