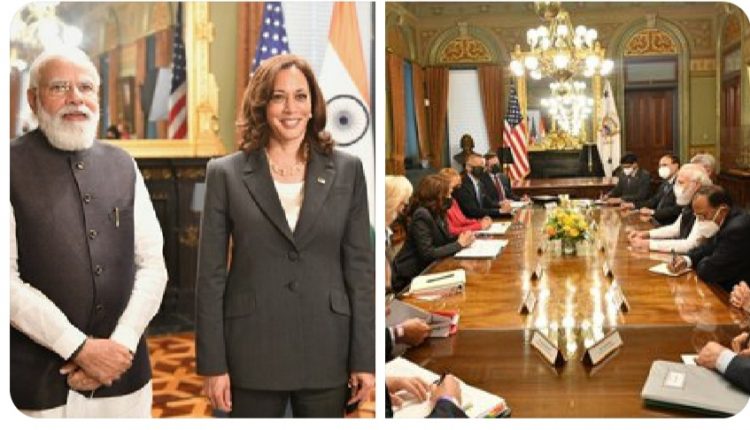 Prime Minister Narendra Modi said on Friday that India and America are “natural partners” as he held the first in-person meeting with US Vice President Kamala Harris at the White House during which the two leaders reinforced the bilateral strategic partnership and discussed issues of mutual and global interest.

“India and America are natural partners. We have similar values, geopolitical interests,” PM Modi said in a joint media appearance with Harris. Noting that India and the US are the largest and oldest democracies, PM Modi said the two countries share values and their cooperation is also gradually increasing.

“I am confident that our bilateral relations will touch new heights under President Joe Biden and you,” PM Modi told Harris, describing her as “a source of inspiration for many people in world”. He invited Harris to visit India.

US Vice President Kamala Harris, during her maiden meeting with Prime Minister Narendra Modi, has “suo motu” referred to Pakistan’s role in terrorism, saying that there were terror groups working in the country and asked Islamabad to take action so that it does not impact on America and India’s security.

Harris said that it is incumbent on the two nations to protect democracies in the best interests of people of the two countries.