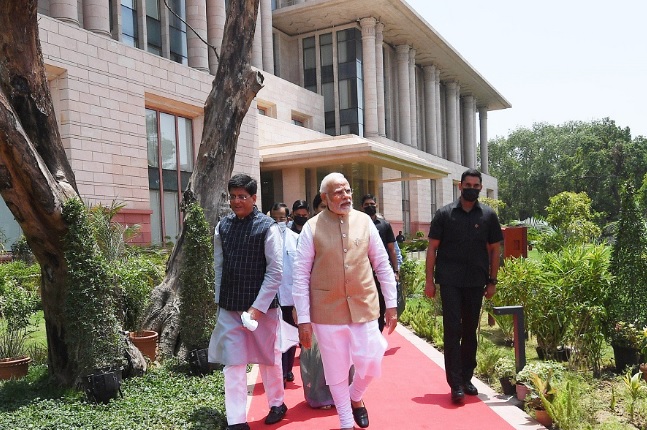 Union Ministers Piyush Goyal, Som Prakash and Anupriya Patel were among those present on the occasion.

Addressing the gathering, the Prime Minister said today another important step has been taken in the direction of the journey of Citizen-Centric Governance in New India on which the country has been moving for the last 8 years. The country has got the gift of a new and modern commercial building as well as an export portal, one physical and other digital infrastructure, he said.

The Prime Minister noted that today is also the death anniversary of the country’s first Industries Minister Dr Shyama Prasad Mukherjee. “His policies, decisions, resolve, and their fulfilment were very important in giving direction to independent India. Today the country is paying its humble tribute to him”, he said.

Referring to the new infrastructure of the Ministry, the Prime Minister said that this is also time to renew the pledge of ease of doing business and through that ‘ease of living’ too. Ease of access, he said, is the link between the two. He said that there should not be any hindrances in communicating with the government and making the government accessible with ease is a major priority of the government. This vision is clearly reflected in the policies of the government, he added.

Referring to many examples of the recent past, the Prime Minister said that in the new work culture of the New India, completion date is part of SoP and is strictly adhered to. He remarked that only when the government’s projects do not hang for years and are completed on time, similarly, the government’s schemes reach their goals, then only, the taxpayer of the country is respected. Now we also have a modern platform in the form of the PM Gatishakti National Master Plan. He said that this Vanijya Bhawan will give a push to the nations ‘Gati Shakti’.

The Prime Minister cited the new Vanjiya Bhawan as also the symbol of his Government’s achievements in the field of commerce during this period. He recalled that at the time of foundation stone laying, he had stressed the need for innovation and improvement in the Global Innovation Index.

Today, India is ranked 46th in the Global Innovation Index and is continuously improving. He had also talked about improving ease of doing business at that time , today, more than 32000 unnecessary compliances have been removed. Similarly, GST was new at the time of foundation stone laying of the building, today, 1 lakh crore GST collection per month has become commonplace. In terms of GeM, 9 thousand crore worth rupees orders were discussed then, today, more than 45 lakh small entrepreneurs are registered on the portal and orders worth more than 2.25 crore have been placed. The Prime Minister had talked about 120 Mobile units at that time up from just 2 in 2014, today this number has crossed 200. Today India has 2300 registered Fin-tech startups, up from 500, 4 years ago. At the time of the foundation stone laying of the Vanijya Bhawan India used to recognize 8000 startups every year, today, this number is more than 15000, the Prime Minister informed.