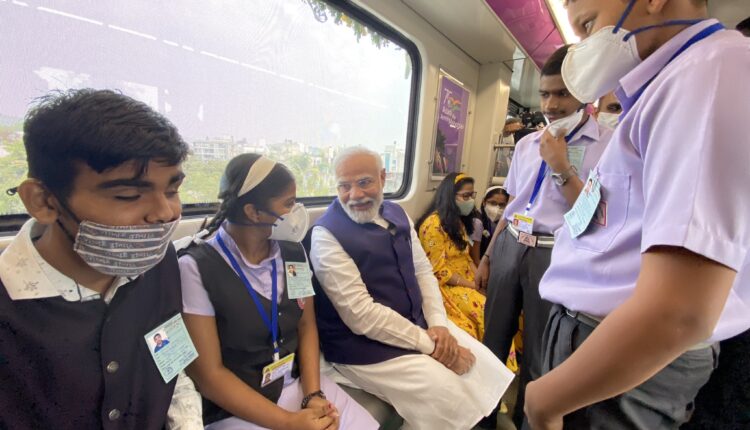 The Prime Minister, who unveiled the statue of Chhatrapati Shivaji Maharaj in the premises of Pune Municipal Corporation earlier, paid tribute to the great warrior king. “This statue of Shivaji Maharaj, who resides in the heart of all of us, will awaken the spirit of patriotism in the younger generation”, he said.

Referring to the inauguration of the Pune Metro Project by him earlier, the Prime Minister said, “It is my good fortune that you had invited me to lay the foundation stone of Pune Metro and now you have given me the opportunity to inaugurate it. It also has the message that plans can be completed on time.”. Shri Modi added “Pune has also continuously strengthened its identity in the fields of Education, Research & Development, IT and Automobile. In such a situation, modern facilities are the need of the people of Pune and our government is working keeping this need of the people of Pune in mind.”

The Prime Minister said that while Metro services were available in very few cities till 2014, today more than two dozen cities are either being benefitted by the metro services or are on the verge of getting it. Maharashtra, he said, has quite a significant share of this expansion if we look at Mumbai, Thane, Nagpur and Pimpri Chinchwad Pune. “This Metro will ease mobility in Pune, give relief from pollution and jams, increase the ease of living of the people of Pune”, the Prime Minister said. He also called upon the people of Pune specially the well-off people to make it a habit to use Metro and other public transport.

The Prime minister said growing urban population is both an opportunity and a challenge. In order to cope with the growing population in our cities, development of mass transit system is the main answer. He listed a vision for the growing cities of the country where government is committed to provide increasingly more green transport, electric buses, electric cars and electric two wheelers. And “smart mobility in every city, people use single card for all transport facilities. There should be Integrated Command & Control Center in every city to make the facility smart. Every city should have a modern waste management system to strengthen the circular economy. There should be enough modern sewage treatment plants to make every city water plus, better arrangements should be made for the conservation of water sources”, the Prime Minister elaborated. He also hoped that such cites will have Gobardhan and biogas plants to create wealth from waste. Energy efficiency measures like use of LED bulb should be the hallmark of these cities. AMRUT mission and RERA laws are bringing new strengths in urban landscape, he said.

Prime Minister, reiterated importance of rivers in the life of the cities and asked for  River Festivals in the such river cities to create a new awareness about the importance and preservation of these important lifelines.

Dwelling on the new approach to infrastructure led growth in the country, the Prime Minister said “The most important thing for the development of modern infrastructure in any country is speed and scale. But for decades, we had such systems that the completion of important projects used to take a long time. This sluggish attitude has been affecting the development of the country as well.” The Prime Minister continued “In today’s fast growing India, we have to focus on speed and also on scale. That is why our government has prepared PM-Gatishakti National Master Plan.”  Gatishakti Plan, he said will ensure an integrated focus as all stakeholders will work with full information and proper coordination.

In conclusion, the Prime Minister expressed satisfaction that “along with modernity, the ancient tradition of Pune and the pride of Maharashtra are being given equal place in urban planning.”

The Pune Metro Rail Project project is an endeavour to provide world class infrastructure for urban mobility in Pune. Foundation Stone of the project was also laid by the Prime Minister on 24th Dec 2016. Prime Minister will inaugurate 12 km stretch of the total 32.2 km Pune metro rail project. The entire project is being built at a total cost of more than Rs 11,400 crore. The Prime Minister also inaugurated and inspected Exhibition at Garware Metro Station and undertook a metro ride from there to Anandnagar Metro Station.