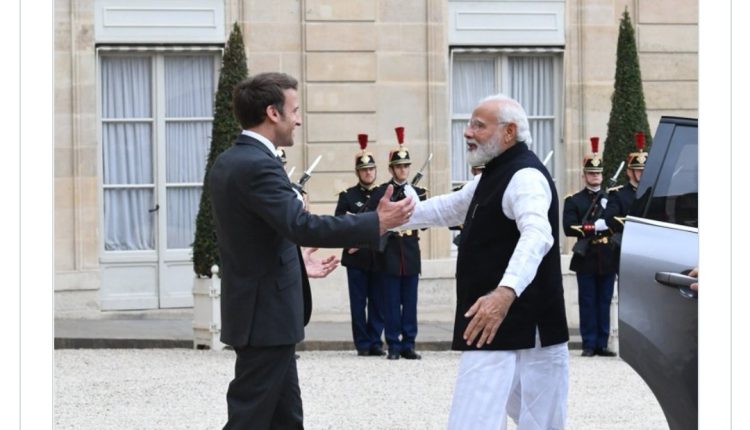 New Delhi: Prime Minister Narendra Modi on Thursday thanked France President Emmanuel Macron and the French government for the “warm hospitality”. Mentioning that his visit to France was “brief but a very fruitful one”, PM Modi said that the two leaders spoke on various subjects, including “bilateral as well as global issues”. PM Modi further added that “India and France are proud developmental partners” with their partnership being “spread across different sectors”.

My visit to France was brief but a very fruitful one. President @EmmanuelMacron and I got the opportunity to discuss various subjects. I thank him and the French Government for the warm hospitality. pic.twitter.com/pJCCvpvjao

Delighted, as always, to meet my friend President @EmmanuelMacron. We talked at length about bilateral as well as global issues. India and France are proud developmental partners with our partnership spread across different sectors. pic.twitter.com/5Kjqcjf0tQ

Tonight, with @NarendraModi, we discussed the different ongoing international crises as well as our strategic partnership. We also talked about food security issues and the FARM initiative, in which India will play a key role. pic.twitter.com/KPOv1P6NZu

PM Modi, who was on a three-day Europe visit, met French President Emmanuel Macron in Paris during the final leg of his tour. He held extensive talks with Macron – who was re-elected to the top post over a week back.

The two leaders focused on several bilateral and mutual interests along with regional and global developments. India and France have also issued a joint statement on Russia’s aggression against Ukraine.

While the two countries condemned the civilian deaths in the war-torn country and called for an immediate cessation of hostilities, India and France said that they are committed to enabling a coordinated, multilateral response to address the risk of aggravated food crisis because of the conflict in Ukraine.