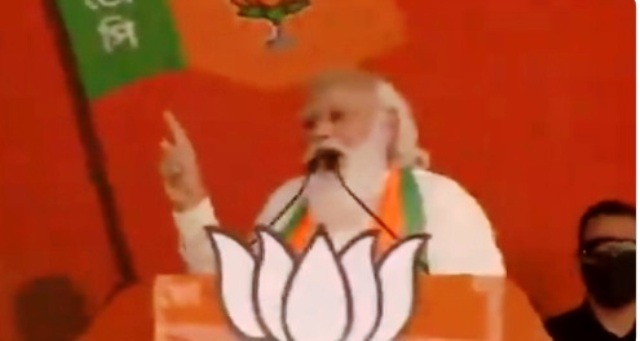 Attending a huge rally at Brigade Parade Ground in Kolkata on Sunday, PM Modi hit out at TMC, Left and Congress saying these parties have an anti-Bengal attitude and added that the next 25 years are very important for the development of the state. He said he has come to West Bengal to make people believe in ‘ashol poribortan’.

The PM said his government will work hard for farmers, businessmen and the development of sisters and daughters of the state.

PM Modi said his government will bring in real change in Bengal where people will regain faith in civil and police administration. He said the democratic system has been destroyed here and added that BJP will strengthen this system.

The Prime Minister also took a swipe at the CM for announcing her candidature from Nandigram and vacating her traditional constituency Bhowanipur this time.

Attacking TMC government, PM Modi said the “Lotus is about to bloom in West Bengal because of muck created by TMC which replaced ‘loktantra’ (democracy) with ‘lootantra’ (systematic plunder).