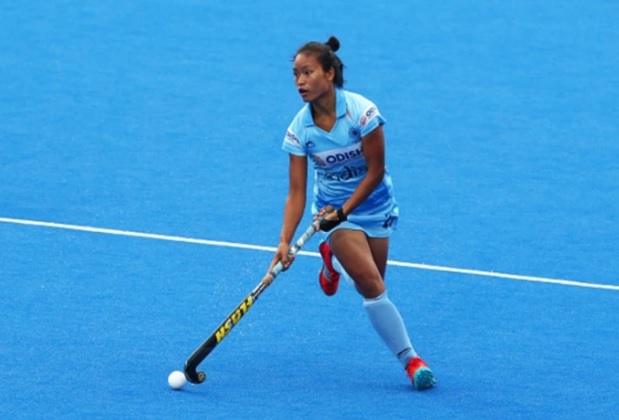 “Playing Hockey For India Has Given Me Everything And More That I Could Think Of”: Salima Tete

One of the youngest players in the Indian set-up, Salima Tete has been instrumental in the team’s success stories in the last half-decade or so, and of course, she hopes to be central to many more moments of glory. On Episode 30 of Hockey Te Charcha, Salima Tete, who was part of the Bronze medal winning team at the 2022 Commonwealth Games in Birmingham, looks back at her journey and more.

Salima, who is now back in her home town in Simdega in Jharkhand after a very long season, explained that ahead of the 2022 Commonwealth Games in Birmingham the team was focused on ensuring they don’t return without a success story to narrate.

“After we had a bad campaign at the FIH Hockey Women’s World Cup Spain and Netherlands 2022, the team’s aim and our focus was very clear. We wanted to do well at the 2022 Commonwealth Games in Birmingham, there was no other option. We were sure we had to get a medal before returning back to India. Kuch na kuch karna hi hai,” Salima said.

A forceful presence in the Indian defensive line-up, Salima believes that the players’ meetings with Hon’ble Prime Minister of India Shri Narendra Modi is nothing short of motivating, and not just for someone like her.

“Meeting the PM was a very big thing for someone like me. All of us meeting the PM, is a source of motivation, so that we keep working hard and trying to achieve good results, and it is also very encouraging for the younger players coming through the system.”

Rolling back the clock by a few years, Salima threw some light on her journey, speaking fondly about the likes of Asunta Lakra and Nikki Pradhan, both of whom have been influential mentors in her career.

“I came to hockey through the junior nationals and I had a role model in Asunta Lakra. I wanted to become like her, when I saw her playing, I felt that if she can do it, so can I. Nikki Pradhan’s a very important figure in my development and has always had enough time for me. My family too is very supportive and they don’t think of the difficulties, my family, my parents and siblings are very supportive. The outlook for them is that we should do well irrespective of everything, we want to be the best version of ourselves,” Salima recollected.

Having learnt to play the sport on grass grounds as young kid, one of the biggest moments in Salima’s career so far has been the 2021 Tokyo Olympics campaign, where India finished fourth. While that has done a lot for the athlete, Salima says it’s ensured that her village has better training facilities, and that it is no more tucked away from the glare of the spotlight.

“Before the Tokyo Olympics, no one knew about our village and after I came back, the focus on our native place has increased a lot. We have people visiting us from different places, people recognising the village I come from. It is really heart-warming. Even for my family, they feel very good when people come to visit. The whole atmosphere has changed and it makes me very happy.”

“Playing for India has really changed my life a lot, it has given me everything I could have asked for. I just want to keep performing for the country and winning more matches,” she signed off.