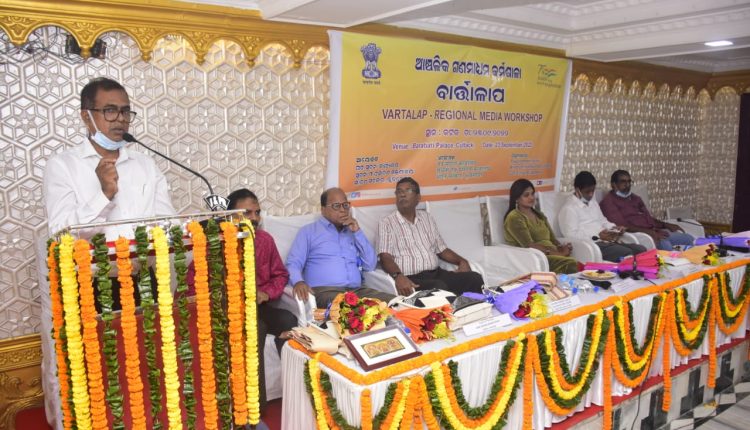 Bhubaneswar: The Press Information Bureau (PIB) Bhubaneswar has organized a Regional Media Workshop “Vartalap” at Cuttack today in order to sensitise the media on various central schemes and initiatives.

On the sidelines of the workshop, Central Bureau of Communication Bhubaneswar has organized an exhibition on Azadi Ka Amrit Mahotsav displaying the unsung heroes of our freedom struggle and “8 Years of Seva, Susashan & Garib Kalyan” depicting the steps, initiatives taken up by the Government of India in the past eight years.

Inaugurating the workshop, Dr. Bhabani Shankar Chayani, DM-Cum-Collector Cuttack said that media plays a very significant role in bringing change, so it is very important for them to remain responsible. “Media should work to bring positive transformation. It is a bigger responsibility,” he said.

Dr. Chayani said that media should not focus on news which is creating gossips. “The information provided by the media should be sensible and action oriented. Programme like this Vartalap is expected to provide a platform where ideas and actions for those can be discussed,” he added.

Attending the event as Guest of Honour Shri Ambar Kumar Kar, CDO-Cum-Executive Officer, Zilla Parishad, Cuttack, said that journalists should keep on the practice of writing and informing the glitches in the governance. “If they don’t, how will things improve? They have been rightly called the fourth pillar, because they have the power to change,” he added.

Dr. Girish Chandra Dash, Joint Director, PIB/AIR highlighted the aim and objective of the vartalap programme. He said, “Vartalap is a platform to strengthen ties between government and media in order to ensure better and effective flow of information down the grassroot level.”

Olympian Smt Anuradha Biswal also attended the regional media workshop and talked about the “Fit India and Khelo India” initiatives of the Government of India. She elaborated how it helped to groom the sporting talents of the country, who are bringing all laurels for the country in the recent past. Veteran journalist and Editor of Samaja, Shri Kanan Bihari Dash spoke about media ethics and responsibility.

Beneficiaries of several government schemes have also shared their experiences during the workshop. A beneficiary of PM Awas Yojana from Cuttack said that with the help of the scheme, she has got her own house and also able to construct a toilet under the Swachh Bharat Abhiyan. She thanked the government for the support.

Shri P.K Choudhury, Media & Communication Officer delivered the welcome address and conducted the workshop. More then hundred journalists partcipated in the workshop and interacted with the officials.