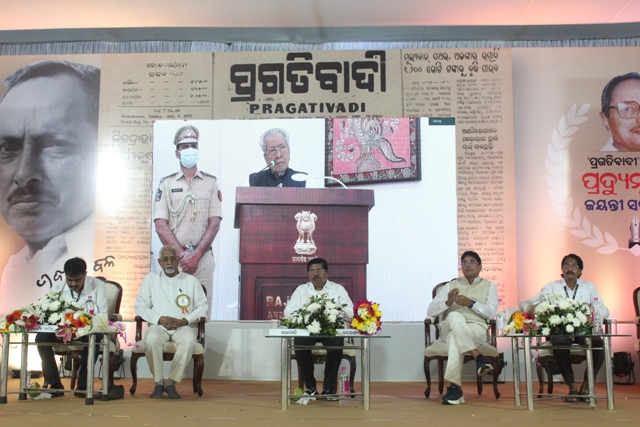 Bhubaneswar: It is said that pen is mightier than sword which was clearly visible in the writes-up of Pradyumna Bal, said Andhra Pradesh Governor Biswa Bhusan Harichandan on Tuesday.

Participating in the 90th Birth Anniversary programme through virtual mode, Harichandan shared his personal bond and association with the late veteran journalist. The Governor said that Bal’s philosophy always reflected on his newspaper.

“He (Bal) was a free-minded politician, writer, Journalist and founder editor of Pragativadi with whom I shared a very cordial relationship,” Harichandan said, adding that Pragativadi and Pradyumna Bal can’t be differentiated.

A politician par excellence, Bal always speaks to his mind in politics. During the days of Emergency in India, Bal’s struggle against the system was really unforgettable, the Governor remembered.

“During emergency, former PM Indira Gandhi, in order to satisfy her totalitarian attitude, had intervened in the judiciary system of India. As per the advice of her political advisors, she removed three veteran judges of Supreme Court which had given birth to a massive nation-wide lawyers’ agitation. In Odisha, I had led the agitation in which Pradyumna Bal had assisted me in every manner,” Harichandan, who was Odisha’s former Law Minister, recalled.

The Andhra Governor also highlighted Bal’s action in the Congress Party in which Bal along with Mohan Bhaiya, Chandra Sekhar was an active member of ‘Young Turks’ wing.

“Pradyumna Bal is a fighter in the Congress party. He never hesitates to face off even the then most powerful Biju Babu. Therefore, everybody used to say that ‘this small man is fighting against the tall man’”, Harichandan maintained.