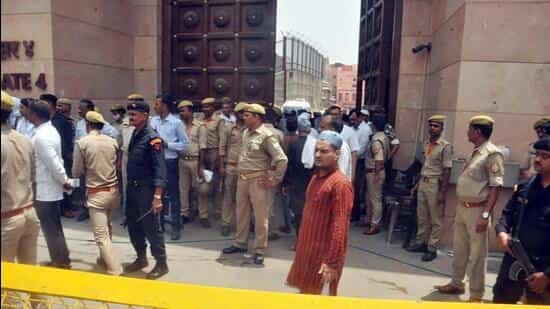 Varanasi: The Gyanvapi mosque in Varanasi witnessed its first Friday prayers at the premises since a ‘Shivling’ was claimed to have been found by Hindu petitioners during a court-ordered survey in the complex on May 16.

“During the Friday namaz, the mosque was packed to its capacity,” said Yasin.

The place where a “Shivling” was found (according to an advocate representing the petitioners) during the survey of the Gyanvapi mosque premises was sealed in accordance with a local court order in Varanasi on May 16.

Later, the Supreme Court had directed the district magistrate of Varanasi to ensure the protection of the area (where the ‘Shivling’ was claimed to be found) and allow Muslims to offer ‘namaz’ and perform “religious observances” at the premises.

For his part, Yasin said alternative arrangements were made for doing wuzu (ablutions). Four drums and over 50 mugs were placed in the mosque premises for the worshippers.

Earlier, the Anjuman Intezamia Masjid Committee had appealed to worshippers not to turn up at the mosque in large numbers but to offer prayers in the mosques in their respective localities.