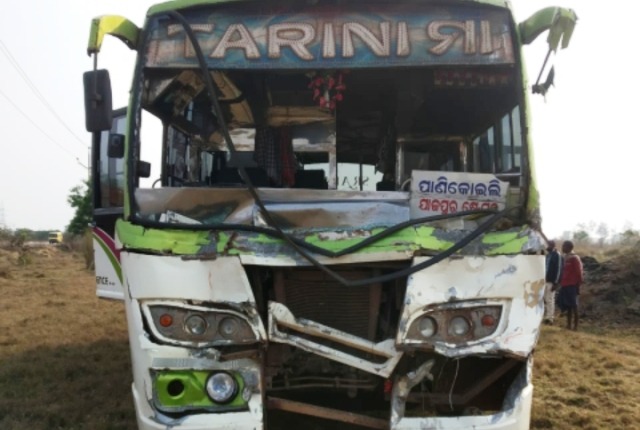 Ragadi: As many as 15 persons were injured after the passenger bus they were travelling in collided head-on with a hyva truck on National Highway 20.

According to available information,  the bus named ‘Tarini’ was en route to Panikoili from Ghatagaon via Jajpur Road this afternoon at around 3 pm. Meanwhile, A hyva truck which was coming from the opposite direction collided head-on with the bus near Bandipol-Laxmi Nagar Chhak.

The collision was so intense that the bus went off-road and entered the nearby farmland injuring the onboard passengers. Immediately, police and fire services personnel rescued the injured and rushed them to Jajpur road hospital in ambulances.

Reportedly, the victims have been discharged from the hospital after primary treatment and all are in good condition. Police have seized the ill-fated vehicles and initiated a probe to ascertain the actual reason behind the accident.

However, sources said the accident took place as the vehicles are commuting on a narrow road stretch due to construction work on the NH connecting Jajpur.

Alert! Rain & Thunderstorm In These Odisha Dists In Next 3-Hrs