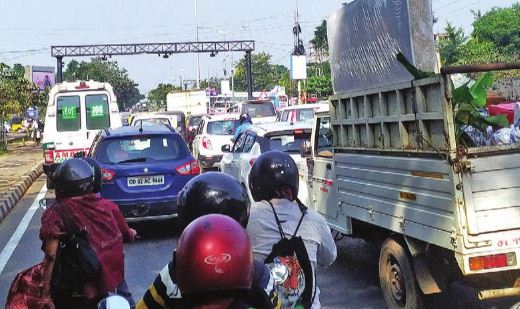 Bhubaneswar: In a bid to reduce traffic congestion in the Chandrasekharpur area of Bhubaneswar, the government has been constructing alternative roads.

Reportedly, the decision was taken after reviewing the progress of the two roads, which were badly needed to decongest the traffic jam on the busy Jayadev Vihar-Nandankanan route.

The construction of the roads on either side of Jaydev Vihar -Nandanklana road is underway.

The left parallel road from Xavier Square will connect to Chandaka Square via Patharagadia and the Institute of Mathematics. The 13-km road is estimated to cost around Rs 92 crore.

The right parallel road from Acharya Vihar to Patia Big Bazar is also making slow progress due to a host of problems, land acquisition being the major hurdle. While the total road is about 6.25 km, estimated to cost Rs 239 crore. However, only 1.05 km has been completed.

The completion of the parallel roads, will facilitate smooth vehicular movement and decongest the busy traffic road.