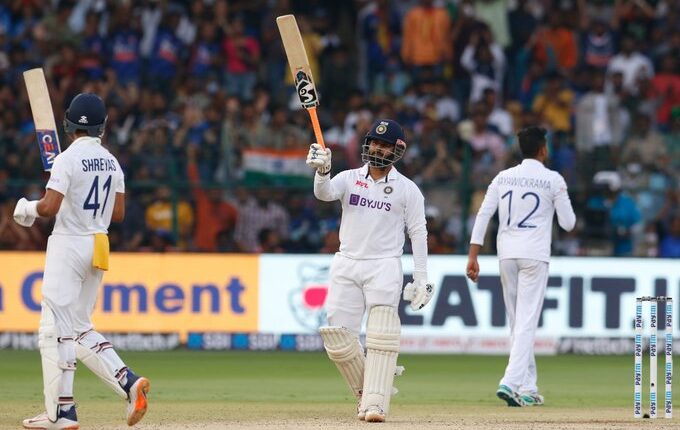 New Delhi: Rishabh Pant scored the fastest fifty in the history of Indian Test cricket and Shreyas Iyer hit his second half-century of the match as India raced to a declaration at 303/9 on an action-packed second day in Bengaluru.

And Jasprit Bumrah, who had earlier completed a five-wicket haul, struck in the first over late on as Sri Lanka closed on 28/1, 419 runs behind with three days still remaining in the match.

In total 14 wickets fell and 354 runs were scored on a thrilling day as the day-night second Test moved along at a breakneck pace.

A thrilling Day Two had started with Sri Lanka resuming on 86/6 in their first innings. But the tourists were restricted to 109 all out within the first thirty minutes of the day’s play.

With his overnight figures of 3/15, Jasprit Bumrah continued his impressive bowling and quickly completed his maiden five-for at home.

Bumrah and Ashwin opened the bowling at the start of the day and wreaked havoc. Lasith Embuldeniya was the first to go as he succumbed to Bumrah’s short ball, giving Rishabh Pant a simple catch. And Bumrah brought up his five-for with the wicket of Niroshan Dickwella for 21 with a well-directed short delivery that took the gloves and through to Pant yet again.

Ashwin cleaned up Sri Lanka’s tail with his variations. Amid a flurry of regular off-spins, Suranga Lakmal failed to pick up the carrom ball and lost his wicket early. And Ashwin then took the final wicket of Sri Lanka, as Vishwa Fernando was unable to read the variation and was stumped.

With a first-innings lead of 143 runs, Mayank Agarwal and Rohit Sharma got off to a good start. But as the openers approached their fifty-run opening partnership, Mayank decided to charge the spinners, and the approach didn’t work for him as he succumbed to Embuldenya, edging it straight into the hands of gully.

Hanuma Vihari survived a close LBW call at the start of his innings but he stood firm with the captain as India went for tea at 61 for 1.

The two batters added 56 runs for the second wicket before Rohit went for a maximum, only to hole out in the deep four runs short of his fifty. Vihari soon followed him back into the pavilion after missing a sweep off Praveen Jayawickrama that rattled his stumps.

That wicket brought Pant to the crease, and he smashed two sixes and a four to show that he wasn’t going to hang around.

India lost another wicket when Virat Kohli was once again trapped leg before wicket in the match, stunning the Bengaluru crowd to silence. But at the other end, Pant showed no signs of slowing down. Seven fours and two sixes later, Pant brought up his fifty in just 28 balls, the fastest by an Indian player in Test cricket.

He played one big shot too many and was out for 50, with Jayawickrama pouching a skier off his own bowling. Yet, thanks to Pant, India had added 138 runs in the second session at a run rate of 4.75, taking their lead beyond 300.

India’s domination continued after the dinner break, with Shreyas Iyer taking the attack to the Sri Lankan bowlers. He kept finding boundaries with regularity and soon brought up his second fifty of the match.

There was some reason to cheer for Sri Lanka as Ravindra Jadeja played on to his own stumps off the bowling of Vishwa Fernando.

But Ravichandran Ashwin and Iyer kept building the lead, which passed well beyond 400 by the time the pair fell in the space of four deliveries.

Ashwin was the first to go, edging behind off the excellent Jayawickrama, with Iyer joining him back in the pavilion at the start of the next over when he was trapped in-front by Embuldeniya.

A late flurry from Mohammad Shami, who smashed 16* off just 8 deliveries, helped the score up to 303. But when Axar Patel was bowled by Embuldeniya – the eighth wicket to fall to spin in the innings – India opted to declare a wicket early.

Facing a tricky mini-session under lights with over three days of the match still remaining and a daunting 447-run deficit, Sri Lanka’s second innings got off to a disastrous start when Jasprit Bumrah struck in the first over.

India’s pacer had been sensational in the first innings, and picked up where he left off, with a huge in-swinging wrapping Lahiru Thirimanne on the pads to consign the opener to a duck.

But Dimuth Karunaratne and Kusal Mendis saw it through to the close, and Sri Lanka will return on day three knowing they have a huge task in-front of them if they are to even avoid a huge margin of defeat.India playing XI: Mayank Agarwal, Rohit Sharma (c), Hanuma Vihari, Virat Kohli, Rishabh Pant (wk), Shreyas Iyer, Ravindra Jadeja, Ravichandran Ashwin, Axar Patel, Mohammed Shami, Jasprit Bumrah.