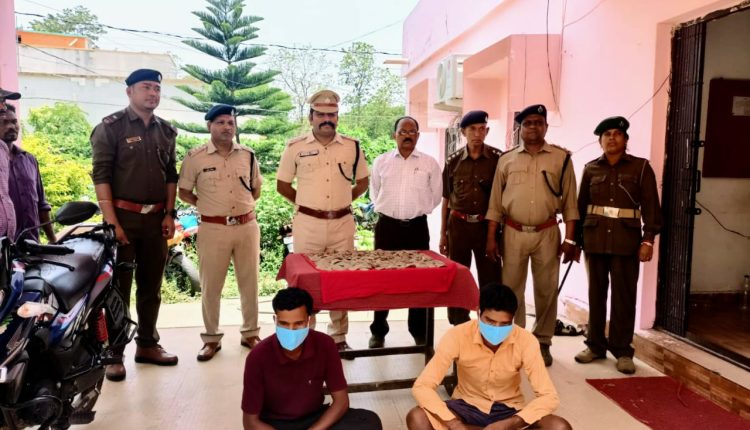 According to a press release issued by Chitrakonda SDPO Anshuman Dwivedi, based on reliable inputs, a joint team led by Balimela SI Rajesh Kumar Sethi and Balimela Section Forester Sibananda Lenka were patrolling near Uskapalli and Chitapari villages on Tuesday.

In the meanwhile, the cops spotted two suspicious persons coming at a high speed on a motorcycle and tried to intercept them for checking. On seeing the police, the duo turned the bike around and tried to speed away in the opposite direction. However, the cops managed to apprehend them on the spot.

Upon search, the police recovered pangolin scales weighing around 1.9 Kg kept inside a bag, the duo were carrying, and also seized the bike used in smuggling the wildlife contraband.

On being questioned, they revealed their identities as Irma Sodi (33) and Ganga Madkami (24), natives of Uskapali village within Orkel Police Station limits in the district.

SDPO Anshuman Dwivedi further informed that the arrested persons have been handed over to the forest department for further investigation and necessary actions in this regard.

It may be mentioned here that during the last two years, the STF has rescued 14 pangolins and seized 30.40 kg pangolin scales.

The Indian pangolin (Manis crassicaudata), also called thick-tailed pangolin, scaly anteater, and ‘Bajrakapta’ in Odia, is a solitary, shy, slow-moving, nocturnal mammal. It is a schedule I protected animal under Wild Life Protection act, 1972, which provides absolute protection-offences under these are prescribed for the highest penalties.

Despite their reptilian appearance, pangolins are in fact mammals. They are trafficked by poachers all over the world, due to their highly coveted scales which are used in traditional Chinese medicine. This illegal trade makes them vulnerable to extinction.