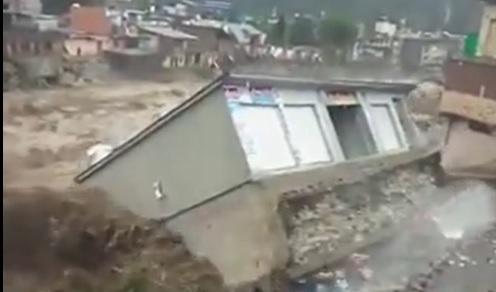 Pakistan Floods: Over 1k Dead & Lakhs Displaced Across The Country

More than one thousand people have died and lakhs were displaced in the massive floods that have wreaked havoc across the neighbouring country Pakistan.

According to Pakistan National Disaster Management Authority, about 119 people have been killed in the monsoon rains in the last 24 hours.

In the northwest of the country, thousands of people fled their homes after rivers in Khyber Pakhtunkhwa province witnessed embankment breaches at vulnerable points, triggering powerful flash floods.

The province of Sindh in the southeast of the country has also been badly affected, with thousands displaced from their homes.

After visiting flood-hit areas, Prime Minister Shehbaz Sharif said the magnitude of the calamity is bigger than expected.

Pakistan has appealed for further international assistance after the devastating floods across the country. The US, UK, United Arab Emirates and others have contributed to a monsoon disaster appeal but much more funds are needed, an interior ministry official told the media.