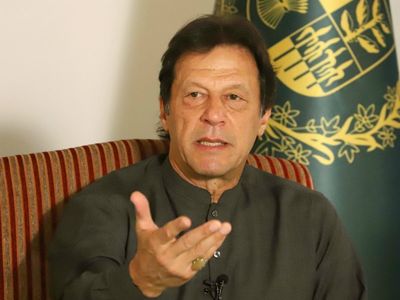 New Delhi: Opposition in Pakistan has rejected confidence votes in favour of Imran Khan alleging  lawmakers were forced to vote for the government.

Pakistan Democratic Movement (PDM) and JUI-F chief Maulana Fazlur Rehman told reporters in Sukkur immediately after the National Assembly session concluded that the Constitution clearly stated the president can summon a session if the PM does not command majority.

He urged the premier to “be courageous and ask the public to cast a vote of confidence through polls.

Earlier in the day, Imran Khan won a trust vote in the National Assembly with his party securing votes above a majority mark in the 342-member lower house of parliament.

Imran Khan is the second Pakistani Prime Minister, after Nawaz Sharif, who went to the National Assembly for a ‘voluntary’ vote of confidence In the 342-member House, 172 votes were needed for a simple majority.

The ruling coalition had 181 members, out of which 157 members were from Imran Khan’s PTI. After the resignation Faisal Vowda, the government’s strength came to 180, whereas the opposition has 160 members in the House.

The 68-year-old cricketer-turned-politician called a meeting of parliamentary parties on Friday, in which all lawmakers of the ruling alliance were asked to vote for the prime minister or else face disqualification.