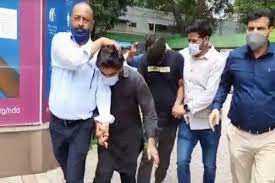 New Delhi: Delhi Police’s Special Cell has identified the alleged mastermind of the terror component of the module that was busted on Tuesday with the arrest fo six persons.

The accused, named Mohammad Usaidur Rehman, has been identified as the mastermind behind the entire module. Rehman is the father of Mohammad Osama alias Sami who was arrested on Tuesday.

Moreover, Rehman, who is in Dubai at present, runs a Madrasa and is suspected to be in direct contact with Pakistan’s ISI.

The probing agencies have found Osama’s mobile chats with his father.

It has also been revealed in the interrogation that the responsibility of setting up a new module of terror and underworld was given to the Colonel rank officer of Pakistan’s ISI, who was present at the time of training at the farm-house of Gwadar Port.

Osama and Zeeshan Qamar, a resident of UP’s Allahabad, were sent to Muscat in Oman by Humaid to join training in Pakistan where the ISI took them to Gwadar through sea routes. In Jioni, near Gwadar, both received training in making bombs, IEDs and committing arson using pedestrian items and handling small firearms and AK-47s.

Following interrogation, it was revealed that Osama left for Muscat, Oman in April where he met Zeeshan who had also come from India. They were joined by 15-16 Bengali-speaking people and divided into sub-groups but Zeeshan and Osama were put in the same group.

At Jioni, they were received by a Pakistani who took them to a farmhouse in Thatta, Pakistan and meet three Pakistanis. Two of them, Jabbar and Hamza, who trained them for around 15 days, wore military outfits.

The duo came back to Muscat through the same route.

All the accused are in police custody for 14 days.

According to conspiracy, the arrested persons were assigned roles in the plan.