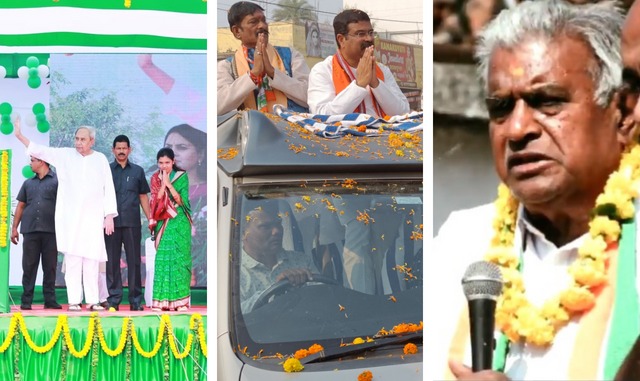 Bargarh: The high voltage campaigning by the three major political parties -BJD, BJP and Congress came to an end today with leaders and candidates making last-ditch efforts to woo voters of Padampur which will go to poll on December 5.

Union Minister and senior BJP leader Dharmendra Pradhan held a grand road show and public meeting to canvas for the party candidate Pradip Purohit on the last day of campaigning. During his address at a public rally at Jagadalpur in the constituency, Pradhan launched scathing attack on BJD president and CM Naveen Patnaik.

The Union Minister came down heavily on the CM over Railways project, Kendu leaf, farmers’ issues. He alleged that Patnaik is shedding crocodile tears on various fronts. Pradhan said Patnaik tells the people whatever his assistants write for him.

On Friday, the Padampur assembly segment had witnessed high-octane campaign as CM Naveen Patnaik descended on the battle ground to canvass for his party candidate Barsha Singh Bariha while BJP MP and national spokesperson Aparajita Sarangi hit the campaign trail for BJP nominee.

Congress too engaged the senior leaders and MLAs for campaigning for party nominee Satya Bhushan Sahoo. PCC president Sarat Patnaik and other top leaders camped in the area for campaigning.

Meanwhile, the district administration asked the leaders coming from outside the constituency to vacate Padampur by 4 pm as the campaigning ended today.

Voting will be held on December 5. Over 2.50 lakh voters will determine the fate of the candidates. As many as 90 companies of central forces and 41 platoons of forces will be deployed for the smooth conduct of the poll. As many as 78 sensitive booths have been identified while 74 booths are in the Maoist-dominated area, EC sources said.