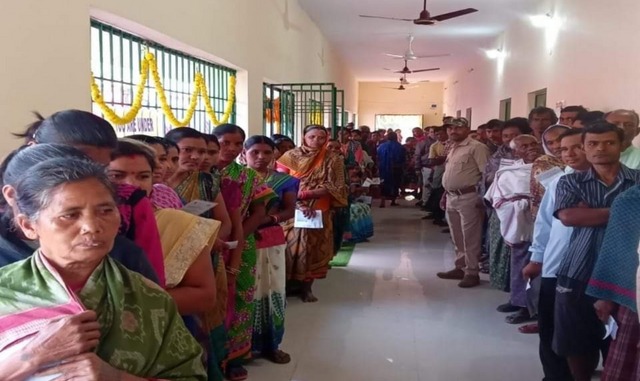 Bargarh/Bhubaneswar: Fate of candidates of three major political parties-BJD, BJP and Congress and others has been sealed in the EVMs as polling for the Padampur by-election concluded peacefully with around 2.50 lakh voters exercising their franchise till evening.

Till 5 pm, 76 per cent polling has been recorded, election official said.

The voting, which began at 7 am, continued beyond the scheduled close at 4 pm as several people were in queue in 89 of the 319 polling stations, poll officials said.

“There was no report of any untoward incident in the entire Padampur assembly constituency during the voting process,” Odisha’s Chief Electoral Officer (CEO) S K Lohani said.

A total of 2.57 lakh voters, including 12 members of the transgender community, are eligible to exercise their franchise in the by-poll.

Around 1,400 police personnel and nine companies of central paramilitary forces have been deployed for the by-election, the official said.

There are 10 candidates in the fray for the by-poll. Counting of votes will be held on December 8.

Purohit came to Paikamala Government Upper Primary School with his mother and wife to cast vote while Congress candidate Satyabhusan Sahu cast his vote at Paikamal.

People from all walks of life participated the in the poll process. The first timers were elated to cast votes for the first time. Special arrangements had been made for the physically challenged voters. Pink booths witnessed crowd while general booths also saw long queue.