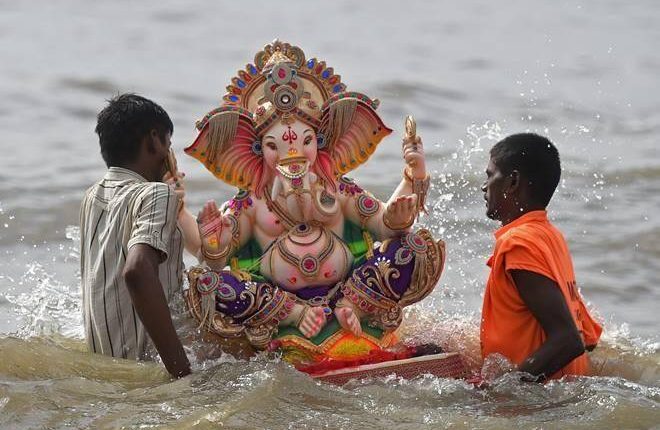 Over 34,000 Ganesh Idols Immersed In Mumbai As Festival Ends

Mumbai: The 11-day Ganesh Chaturthi festival has ended. Over 34,000 idols of Lord Ganesha were immersed in Mumbai, according to an official.

The immersion of idols, which began on Sunday morning on ‘Anant Chaturdashi’, continued till the early hours of Wednesday. A total of 34, 452 idols, including 5,043 installed at public mandals and 29,060 installed by people at their homes, were immersed in various water bodies in the city, an official from the Brihanmumbai Municipal Corporation (BMC) said.

Ten days after welcoming Lord Ganesha to our homes on the occasion of Ganesh Chaturthi, devotees bid adieu to Ganesh idols on the day of Anant Chaturdashi.

The day falls on the fourteenth day of the Shukla Paksh or the waxing phase of the moon in the month of Bhadrapada or Bhadon. The process of bidding adieu to the idols of god on Anant Chaturdashi is known as Ganesh Visarjan. This year, Ganesh Visarjan will take place today on September 19.