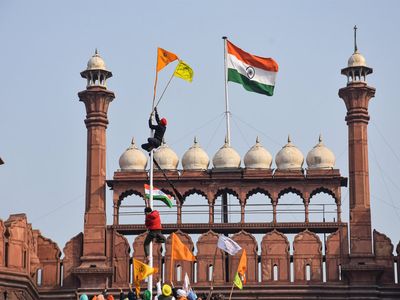 New Delhi: An NGO has claimed that over 100 farmers have gone missing after the violence on R-Day at Red Fort in the national capital.

Punjab’s human rights organization has said that those missing are farmers belonging to the state who had participated in the tractor  rally on the Republic Day. It said 12 farmers from Tatariwalla village in Punjab were missing since the tractor rally in Delhi.

Meanwhile the Delhi Sikh Gurudwara Prabandhak Committee and other like-minded organizations have announced that they will provide legal assistance to the farmers who have been entangled in false cases by the government. So far police have arrested 18 farmers allegedly involved in violent activity on R-Day.

Meanwhile the government has temporarily suspended Internet services at three border points of Delhi- Singhu, Ghazipur  and Tikri till 11 pm of January 31.

The farmers have been protesting against the Centre’s farm laws since November last from these three sites.

The Ministry of Home Affairs, in a notification issued on Saturday afternoon, said that the services were suspended at the Delhi borders and adjoining areas to “maintain public safety and averting public emergency”.

The notification said it is necessary and expedient to order the temporary suspension of internet services in the areas of Singhu, Ghazipur and Tikri, and their adjoining areas in the NCT of Delhi from 11 pm on January 29 to 11 pm on January 31.