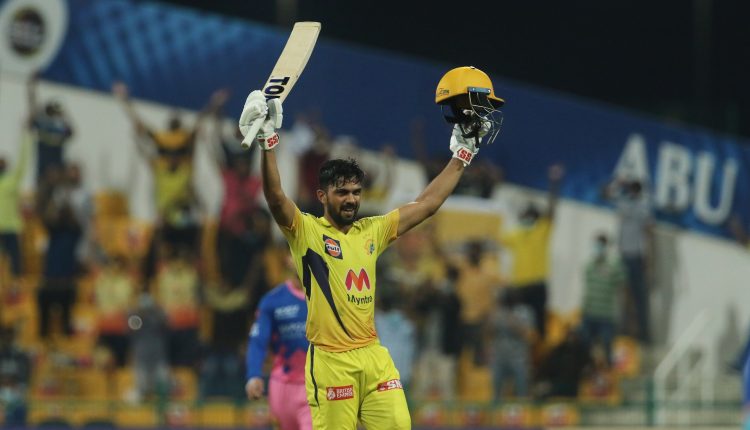 Gaikwad’s maiden IPL hundred not only helped CSK to score 189/4 but also he became the first batsman to amass 500 runs this season taking Orange cap with him.

Earlier, Sanju Samson-led Rajasthan Royals (RR) have won the toss and elected to bowl vs MS Dhoni-led Chennai Super Kings (CSK) in Match 47 of the Indian Premier League (IPL) 2021 on Saturday at the Sheikh Zayed Stadium in Abu Dhabi.

Raina, who was promoted to bat at 3rd postion, again failed to score and the same was done by Rayudu.

Later, an outstanding innings from Gaikwad 101* (9 fours and 5 sixes) and Moeen Ali (21) paved the path for the CSK to score a well target for Royals.

In a quick move, Gaikwad added 55 runs for the fifth wicket along with all-rounder Ravindra Jadeja who scored a quickfire 32 runs with a strike rate of over 200 and remained not out.

Rahul Tewatia was the top performer for Rajasthan as he picked up three top-order wickets. RR need 190 runs to win to stay alive in the race to playoffs. Chennai who are at the top of the points table have already qualified for the playoffs while Rajasthan are still in the quest for the qualification ticket.