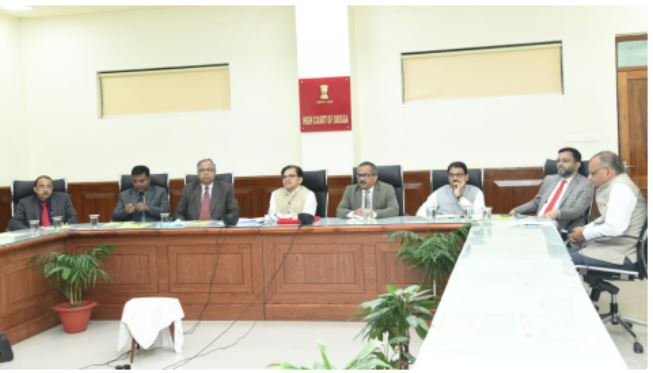 The District Judges, Judicial Officers, Office Bearers of the Bar Associations and the Collectors and Superintendents of Police of the three Districts attended the event through virtual mode.

Congratulating the people and the advocates of the four places, Chief Justice Dr. S. Muralidhar said Courts are institutions funded by people and are meant to cater to their needs, and the Bar should not hesitate attending the court work under any difficulty.

Chief Justice expressed concern over the recent practice of some Bar Associations in not attending regular Court work in the pretext of scorching heat during summer, and urged the legal fraternity to be sensitive to the plight of under trials and other litigant public who look up to the Courts for justice.

He also assured that all the infrastructural support including Air Conditioners would be provided to the Bar. The Chief Justice called for the need of Judicial system to work like the public health system which remains alert to serve the people day and night.

He called upon the Lawyers and Judges to come together to strive to deliver the constitutional promise of equal and fair justice.

Speaking on the occasion Justice Biswajit Mohanty, the Administrative Judge for Puri said it has been constant endeavour of the High Court to bring people closer to justice and new Courts are being established for ensuring speedy access to justice for people living in far flung areas.

Justice K.R. Mohapatra, the Administrative Judge for Sundergarh said opening of the new Courts in remote areas is meant to achieve the goal of access to justice and timely dispensation of justice for all.

Justice Mohapatra emphasized on mutual cooperation between Bar and Bench and said the quality of judgment by a Judge depends on the assistance rendered by the Bar.

Justice B. P. Routray, the Administrative Judge for Kalahandi expressed hope that the litigants of remote areas would be benefited by establishment of Courts in their places.

With the opening of the Courts of Civil Judge (Junior Division)–cum- Judicial Magistrate First Class at Kanas, Hemgiri, Biramitrapur and Thuamul-Rampur, the long standing demands of the people of those areas have been fulfilled. Including these, ten new Courts in the year 2022 have already been opened in the State.

Treat Your Dry Skin With These Easy DIY Hacks