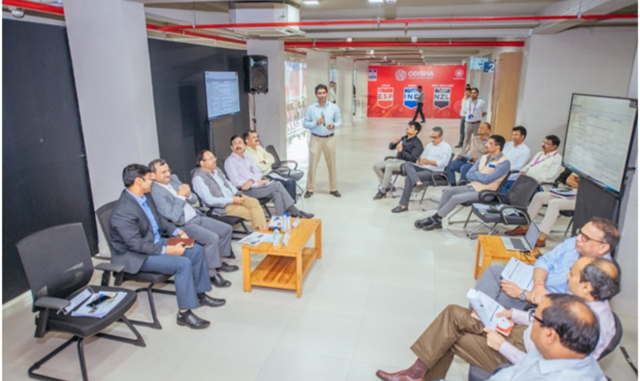 Bhubaneswar: On the side lines of the ongoing FIH Hockey Pro League 2022-2023, the Organising Committee of the FIH Hockey Men’s World Cup 2023, Bhubaneswar and Rourkela, conveyed a meeting along with senior officials of Hockey India for reviewing progress of the preparations for the upcoming world cup.

Chaired by Chief Secretary Suresh Ch Mahapatra and President Hockey India DilipTirkey, the meeting brought together heads of all departments to review the progress of various activities related to the smooth and successful conduct of the event.

Chief Secretary directed different departments to complete the projects aligned with the marquee event well before the scheduled time.

Thrust was laid on connectivity and hospitality, and showcasing Odisha as the land of heritage and culture besides being a hockey hub.

Discussions in the meeting showed that Commercial flights to Rourkela were expected to commence from December 2022. Provisions were being made for charter flights between two venues of the World Cup for the teams.  Special buses would also ply during the World Cup to make it easy for players, officials and spectators to have a smooth experience. Special attractions were being curated by the Tourism Department to make a lasting impression on the visitors and fans.

Chief Secretary Sri Mahapatra directed to utilise the marquee event for promoting hockey amongst children. It was decided to orgay sports carnivals and sports events at district level in association with schools. The meeting also looked into the matters relating to Technology, Security, Safety, Pollution, Beautification, promotion, City fests etc.

Sports Secretary R. VineelKrisha said, “Under the leadership of visionary Chief Minister, Naveen Patnaik, Odisha has set a benchmark with the Hockey Men’s World Cup 2018 and the state is committed and working towards  hosting this at a spectacular scale”.

Sports Secretary, Sri  Krishna presented a report on the various functional areas of the event for the two venues, Bhubaneswar and Rourkela. He said that  collective efforts  between departments would ensure timely completion of the  venues and related infrastructure for the tournament.

Chief Secretary Sri Mahapatra laid focus on   adoption of  green practices at the two venues. The 2023 edition of the Hockey World Cup has stirred the emotions and enthusiasm of fans and players, and people are eagerly looking forward to January when Odisha will once again  demonstrate why it has evolved to become a global hub of hockey.