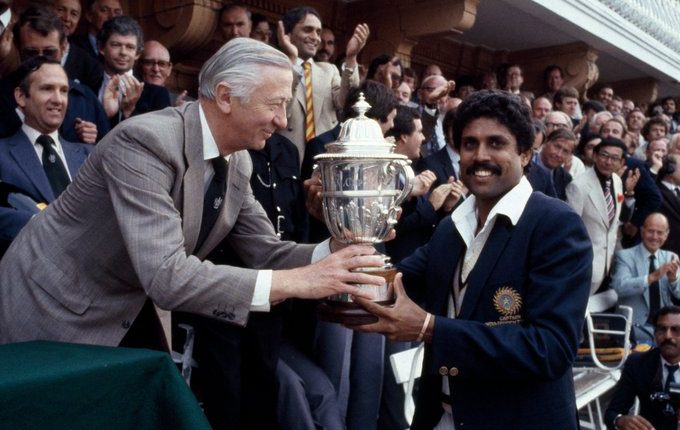 New Delhi: On this day, June 25, 1983, India bagged the cricket World Cup trophy for the first time. India defeated the West Indies in the final of 1983 World Cup (officially called as the Prudential Cup 1983). It was the third edition of the Cricket World Cup tournament which was organised in England and Wales.

The 1983 World Cup tournament began on June 9, 1983 and ended on June 25, 1983. All the ODI matches consisted of 60 overs per innings. Eight teams participated in the tournament. These were England, India, Australia, Pakistan, West Indies, Sri Lanka, Zimbabwe and New Zealand. The teams were divided in two groups. Every team played twice with other teams of its group. The top two teams from each group qualified for the semi-finals.

India defeated West Indies in the finals by 43 runs. The Windies had won the toss and opted to bowl first. The Kapil Dev-led side managed to score just 183 runs as Andy Roberts took three wickets while Malcolm Marshall, Michael Holding, and Larry Gomes picked up two wickets each.

For India, Kris Srikkanth top-scored as he played a knock of 38 runs, apart from him, no other batsmen managed to go past the 30-run mark.

Defending 183, India did a good job of keeping a check on the Windies run flow and Madan Lal then dismissed the key batsmen Vivian Richards (33), reducing Windies to 57/3.

Soon after, the team from the Caribbean was reduced to 76/6 and India was the favourites from there on to win the title. Mohinder Amarnath took the final wicket of Michael Holding to give India its first-ever World Cup title win.

In the finals, West Indies was bowled out for 140, and as a result, India won the match by 43 runs.