On the second day of his visit on Thursday, Justice Shri Patnaik reviewed the progress in the various public welfare projects at Bargaon, Rajgangpur and Kuarmunda blocks of Sundargarh district which are developed with financial support from OMBADC. 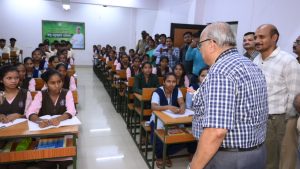 Justice Shri Patnaik first visited the advanced studio for conducting virtual smart classes at the office of the District Education Officer in the district headquarters and spoke to the teachers taking smart classes. The studio has been connected to various schools through V-Sat link to broadcast virtual class.  The facility proved to be of special help to continue seamless teaching during the Covid pandemic. The lectures by veteran teachers would be recorded at the studio and later beamed to the mobile phone of the students. 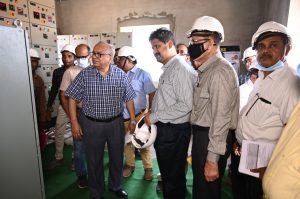 Thereafter, Justice Shri Patnaik inspected the infrastructure available at the Community Health Centre (CHC) Bargaon and inaugurated new doctor and staff quarters. He then visited the IPU&TC located in the health centre campus and took stock of the various services offered there by interacting with the physiotherapists and beneficiaries.

Eleven mega piped water projects are being made operational in Sundargarh district to provide potable water at every household across the 17 blocks. Justice Shri Patnaik inspected the progress of works at one of the under-construction projects at Laing in Rajgangpur block. 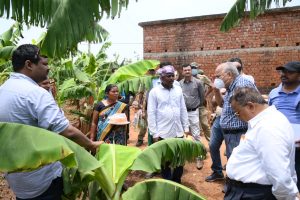 Justice Shri Patnaik toured the banana plantation in Thapaberna village at Keshramal Gram Panchayat of Rajgangpur block. He expressed his satisfaction at the role played by the banana plantation in empowering women financially and strengthening the livelihood of people in rural areas. He also visited the 5 metric tonne capacity solar-powered cold storage unit which has been set up to store the farmers’ produce. 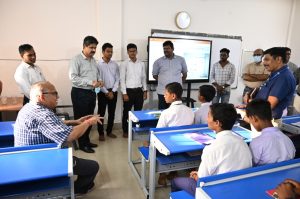 All the government high schools in Sundargarh district are being given a facelift in a phased manner under the state government’s 5T initiative as per the vision of hon’ble Chief Minister Shri Naveen Patnaik. The high school education environment is being made attractive with the introduction of smart classrooms, modern Science Technology Engineering & Mathematics (STEM) based science labs, ICT labs, library and reading rooms, renovated playgrounds and sports infra, pure drinking water and separate and hygienic toilets.

Justice Shri Patnaik inspected the smart classrooms, ICT lab and other infrastructure at the transformed Kumjharia Govt High School in Kuarmunda block. He spoke to the students and teachers at the school. 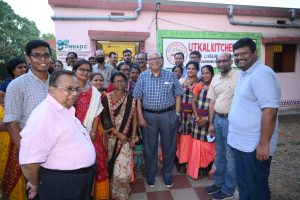 In the afternoon, Justice Shri Patnaik inaugurated a new Community Resource Centre at Kuarmunda block where the Anganwadi and ASHA workers will be trained in various government schemes and programmes.

Under the Odisha Livelihoods Mission, SHG Women are being provided Rs 50,000 monetary incentive through ‘Startup Village Entrepreneurship Programme’ for opening business like tailoring shop, xerox shop, and beauty parlour etc. Similarly, through the Aajeevika Grameen Express Yojana (AGEY) they are being given an incentive of Rs 3 lakh to become self-dependent by purchasing Auto Rickshaws. The initiative will solve commute issues in the area while turning a livelihood opportunity for the target beneficiaries. As many as 10 AGEY beneficiaries and 3 Startup Village Entrepreneurship Programme beneficiaries of the block spoke to Justice Shri Patnaik.

At the last leg of his 2nd day visit Justice Shri Patnaik went to the Eklavya Model Residential School (EMRS) at Kuarmunda and exchanged notes with ST students taking coaching for medical, IIT and similar entrance examinations under the student incentive programme. He wished them success in their career.