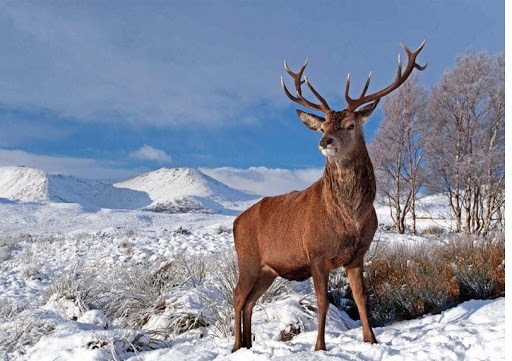 Srinagar: With thick blanket of snow covering Kashmir, authorities of the Jammu and Kashmir Wildlife department have made arrangements for food for the endangered Kashmiri stag, locally known as “Hangul” in the Dachigam National Park.

The Hangul is the only surviving sub-species in the Indian subcontinent of the Red Deer family native to Europe. The magnificent mammal has been declared as a ‘critically endangered species’ by the IUCN (International Union for Conservation of Nature).

“This year it snowed much more than usual and the deer came down to the Dachigam National Park in search of food. They are our animals and we are being careful and making sure that Hanguls get enough to eat,” said Younis Ahmad, wildlife guard at the National Park.

The officials have placed huge chunks of dry willow salt in various parts of the national park to feed the endangered species of animals.

He added that the movement of the Hangul has increased this year so extra care is being taken to ensure that they get enough food.

Fresh vegetables and salt licks have been placed in specific hotspots across the park for the deer.

Known for its giant antlers bearing 11 to 16 points, the Hangul has been hunted for centuries and its habitat has been destroyed, leading to its population plunging to 150 (as of 2017).

Once found in high altitude regions of Northern India, the Kashmir Stag is now confined to only Dachigam National Park in Kashmir. It has been considered as one of the rarest mammals in the subcontinent for the last six decades.