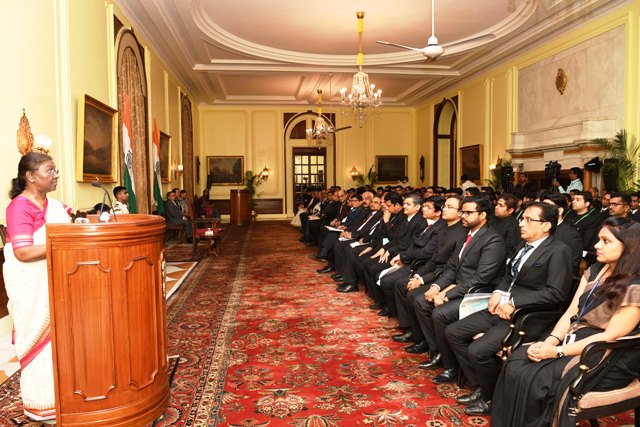 Addressing the officers, the President said that after becoming part of the respective services, their primary aim should be to serve the nation and its people with utmost sincerity. In their journey as public servants, they will get opportunities to bring about changes. Such changes can transform the lives of people. She was confident that if young offices pursue the path of serving the people, they will earn a great deal of satisfaction from their job.

The President was happy to note that the Directorate General of Defence Estates has adopted technologies like satellite imagery, geo-spatial techniques and Artificial Intelligence for management of defence estates. She urged Indian Defence Estates Service Officers to utilize technology to the maximum possible extent for effective administration of the cantonments.

The President said that technology has even more central role to play in the career of Indian Telecom Service officers. India has undergone a telecom revolution during the last two decades. Launch of mobile telephony and faster internet networks in India have enabled the country to tap its vast digital potential. It is important for us to have the best quality telecom and internet services in order to achieve the status of a developed country. As we shift towards 5G Mobile telephony, the leaps in the technological advancements and its implementation are going to be swift. It is responsibility of Indian Telecom Service officers to keep abreast with these developments.

Addressing the officers of Indian Skill Development Service, the President said that in order to benefit from our demographic dividend, our huge human resources need to be adequately skilled. Skilling our people is critical as it would make our working-age population productive and help in the development of our country. She expressed confidence that officers of Indian Skill Development Service will be instrumental in encouraging the skill-ecosystem with their fresh approach and thinking.

Addressing the probationers of Indian Trade Service, the President said that the Indian growth story today is very promising. As we aim to become a five trillion-dollar economy, we look forward to young officers like them playing a significant role. She said that the disruption to global supply chains due to Covid-19 and other geo-political events have opened up new investment opportunities in various sectors.

Outsourcing Of Loan Recovery Not Stopped But Expect Entities To Be On Right Side Of Law: RBI