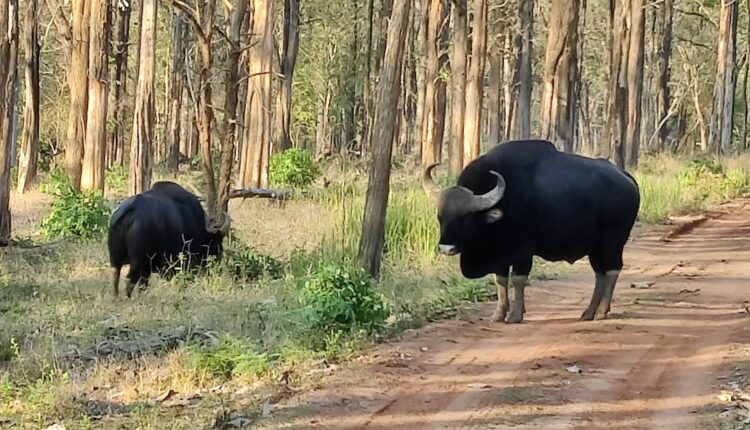 Of Gaurs and other animals

The locale was deep in the dense forests of Kabini, about five hours drive from the busy IT hub of India, Bengaluru. Five individuals from different walks of life. The driver is a local expert, or so he would like us to believe. A relatively newly married couple, who, surprisingly, were not very sure about the duration of their alliance.

We have seen our daily dose of tigers, leopards, deer, and similar residents of the forest on a sunny, albeit pleasant afternoon. Being a novice in such expeditions, I am reasonably elated to have sighted these animals. I have even obtained a large number of photographs on my phone camera. I must admit experiencing a bout of embarrassment at not possessing a professional looking camera with the ubiquitous protuberant lenses. I have a theory about such devices, but that is another story altogether.

We were rocking back homewards in the open off roader of questionable vintage and origin, little knowing that a life changing event awaited us. 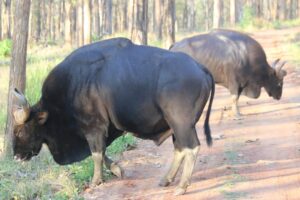 The Indian bison or Gaur is a remarkable beast. The male weighs anywhere between eight hundred to fifteen hundred kilograms. The bulk of this weight is pure rippling muscle, especially on the dorsal aspect just behind the occipital part of the skull. The muscle there sits like a ridge and exudes sheer masculine power. It also enables the massive creature to effortlessly lift heavy objects with its two elegant horns. It is pertinent to mention here that the horns terminate in sharp knife points.

At about 5 pm, out of the blue, we find ourselves in bit of a bother. Our homebound vehicle is suddenly obstructed by two Gaurs. As described above, these are the male variant and upwards of a thousand kilos for good measure. They look reasonably docile. They also appear in no mood to allow us to continue our journey. Our expert, the driver, gestures us to keep silent.

I will digress a bit here. This driver is in his assigned seat, trying his best to live up to his reputation of being an expert. One of us is from North West India, who has somehow managed to make South India his home. He is involved in the mysteries of the IT industry, has multiple patents and is an avid golfer. He owns a Mercedes car. He is in the front passenger seat. In fact, he is standing on the footboard, ever the intrepid explorer.

Just behind him, in the second row, is the doctor in the group and the author of this piece. I have for some time now, lost interest in practicing medicine. These days I like to believe that I live a life of decadence and, might I say, debauchery. The extent of such claim is, however, severely limited by the ravages of time and so, it is not as much fun as it sounds. I have dozed a little but now I am awake and reasonably alert. Decadence in the form of fine spirits and a nicely chilled room is just thirty minutes away.

Adjacent to me is another exponent of the IT industry. No member of the human species can win an argument with him. Period. Our friend has the ability to convince the any person, that all that he or she, the person in front, that is,he, or she, as the case may be, has any which way, led a meaningless life, till now, and has still the time to change course, so that a contribution to society can be contributed. The complexity of the aforesaid sentence is deliberate.

Behind me, in the third row, is a serious looking gentleman belonging to the Indian Government Services. Behind the straight face lies a malevolently hilarious sense of humour. He can cut you to size with a jab and slash of vocabulary and leave you with your innards hanging outside, needing urgent surgical attention. At the same time, he is so lovable that you will, after having recovered from such surgery, come back to him for a repeat assault. He seems to be more in love with colourful flowers of various shapes than in the animals on offer. Indeed, he knows the names of most flowers, including their botanical nomenclature. I start regretting falling asleep in my intermediate science Botany classes and feel very humbled. 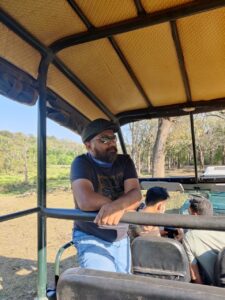 On his right, is a member of the airforce. If you know what I mean. He is a reluctant guy who is involved with a newspaper. He is a compulsive traveller and probably the reason why I am in this situation, in the first place. He is not a man to be trifled with. No sir. He is full of nervous energy and one can get tired just watching him zap around wherever he is. He will shortly be on his way to the land of Zeus, Hermes and the Acropolis, armed with a much-covetedGreek PR Visa. A very brave man as we shall soon see.

Coming back to reality and the grim present we find ourselves in, we continue to be confronted by the two Gaurs. One of them is slowly and steadily crossing the road in front of us. He is foaming at the mouth and his left eye, the one I can see, is nearly closed. My medical training and power of clinical observation takes over and quietly inform my compatriots that this animal is definitely ill or on the verge of senility. I predict an early death for the poor beast, and I am actually feeling sad for him. He ambles on and positions himself alongside the vehicle, barely ten feet away. He appears harmless and successfully removes himself from our area of concern.

The other Gaur is definitely of a more aggressive frame of mind. He looks at us with a restrained degree of malevolence. However, he is just standing his ground and probably thinking that the intruders in his domain, that is us, will soon remove themselves.

Our driver, the expert, suddenly gets afflicted by a surge of foolish machoism. His training deserts him. Why, we do not know. Perhaps it is testosterone fuelled. Or it is the urge to reach home after a day’s hard work. Maybe he needs to evacuate his bowels. Or maybe he is just plain stupid. He presses the accelerator and moves forward threateningly. At least from the anteriorly placed Gaur’s point of view.

A thousand plus kilograms of raw power unfolds in front of us. A massive snort raises dust at least six feet high. The left eye expands to four times its resting state. The massive twin sabre tipped horns snap around so that they are now pointed our way.The shoulder muscles are bunched up and the tail is partially raised. His intentions are nowtruly clear.

Our friend from up north, whose ancestors have fought may a war against marauding Islamic invaders, sits down in the front seat with an almighty thud. In a fight or flight situation the reaction is unequivocally, flight. The pain in the posterior is masked by the flood of adrenalin elicited by the impending threat.

To his immediate south, I am transfixed in my seat and as I sensibly look around for escape routes, I am confronted by the other Gaur, who has quite adeptly and surreptitiously, flanked us on my side. I look into his baleful eyes, also expanded four times now. His lassitude has vanished and so has the ‘illness’ induced foam in his mouth. He is moving quite nimbly and is now remarkably close to me. My clinical diagnosis of his impending demise is reduced to ashes. This Gaur is alive, kicking, and ready to impale, one might add.

Our friend from Himachal is not saying much and, perhaps, believes in the theory that if he cannot hear me, and by extension and by some miracle, cannot see me, he cannot harm me. He is playing possum and hoping for the best.

The man from the Indian Government Services has realised that we are indeed in danger. He searches for appropriate words of advice and articulates something about two set of horns and four of us skewered like kebabs. Or tandoori chicken. I am not really sure, though I fleetingly think that the kebab analogy is more appropriate. It just sounds more realistic. He follows it up by a rather loud ‘Oh shit’ or ‘O Teri’. I am again not very sure.

There comes that moment in life which will, I am very sure, remain imprinted in all our respective memories for all time to come. Not taking Alzheimer’s into account, of course. An utterance of such bravery and disdain that the ethos of which, if somehow transplanted into a commander on our north western border, would end the longstanding conflict with our neighbouring country in a matter of minutes. Our guy who is involved with a newspaper says, with a swagger only airforce guys can muster, ‘Marega toh marega, apne ko kya hai’. Loosely translated, he is saying, in the face of impending disaster and probably, a gruesome death, ‘If he hits, he hits, who the hell gives a damn’.The nonchalance is confidence personified and borders on arrogance. 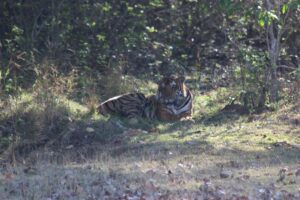 Meanwhile, the Gaur on the left is about to attack. The one if front is directing his anger at the nearby undergrowth and has gone and uprooted at least fifty square feet of bushes and earth. He is flinging the debris in all directions as if indicating what lies in store for us. The kebab concept, at this point of time, appears to be a distinct possibility. All of us, in the post safari debrief, will admit to visualizing the graphics. Just when things look bad for us, our driver regains sanity and enlightenment. He puts the vehicle in gear and rams down the accelerator. We are suddenly clear of danger.

Later in the evening, in the safety of our resort rooms, fortified with beverages and exotic vapours, we sit and laugh about the incident. We discuss mundane issues like ramming motorcycles into giant pigs, communication modalities of plants and trees and about the reason for of existence for good measure. And we end the day, or night, by saying ‘Apne koh kya hai’!

A dedicated surgeon, a sports buff , a guitar player, an amateur cook, an avid reader and a family man, Dipak Mitra is an easygoing and humourous person, quite ahead of his times.

Dr Dipak Mitra, is the Managing Director of Sun Hospital Pvt. Ltd. at Tulsipur in Odisha’s Cuttack. He can be reached at dipakmitra@msn.com.

Bangladesh has highest methane emissions in the world

Djokovic’s primer for the French Open