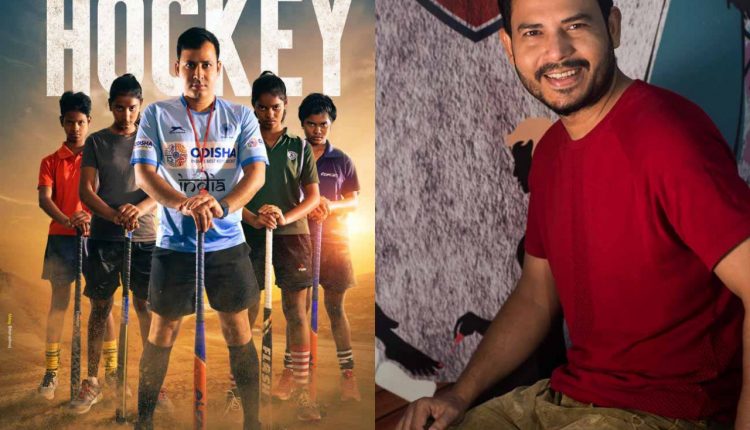 Bhubaneswar: On National Sports Day, internationally acclaimed filmmaker, promoter and curator Jitendra Mishra who has been widely known for promoting value based, independent and regional films from India at world platforms has picked up the recent sports documentary from Odisha ‘The Mountain Hockey’ directed by Avinash Pradhan & Debasish Mohapatra, produced by Raj Kishore Hota of Cinespinner Productions and ULB Films for world promotion.

The twenty-nine minutes film narrates the story of a teacher, hockey coach and sports activist Rajendra Kumar Kujur who goes through a lot of struggle and hardship to teach hockey to several tribal girls in Amlikhaman village at Sambalpur district, Odisha. This is an inspiring story of few passionate youth and their never give up attitude in spite of several challenges in life.

“I really appreciate the honest intention of the young filmmakers behind making this film, we had agreed in principle much earlier and I am happy to have collaborated with this project. My key objective is to support and promote sincere filmmakers and positive stories from our region, we all should do it together. This way I would like to pay homage to the legendary Major Dhyan Chand on National sports day this year” said Jitendra Mishra on this occasion.

Avinash Pradhan the director of the film said “A really precious moment blooming up for all of us since our Odia language documentary The Mountain Hockey is premiering on National and International film festivals. A heartfelt thanks to Jitendra Mishra sir for carving us this noble opportunity. Now Our Hockey Girls will out-craze their voices loudly internationally”. And Debasish Mohapatra Said “Our Moto to make this film reach the maximum numbers of audiences around the globe . This momentum soon will be premiering on the festival circuit”.

Raj Kishor Hota the producer says “It’s an absolute Dream come true moment for all of us to showcase our documentary The Mountain Hockey around the globe. Mr Jitendra Mishra sir is our mountain man who stands & support our film with this collaboration to take our film to the globe”

Avinash Pradhan & Debasish Mohapatra both are the young dynamic filmmaker’s from Odisha. They both planned this documentary film The Mountain Hockey since the World Cup open 2018 which has been inaugurated by Odisha CM Shri Naveen Pattnaik and have mastered the documentary very well. Rolling all the odds today. The Mountain Hockey is ready to showcase in the national & international film festivals .

It is said that Artists are just the children who refuse to put down their crayons. In the world of cinema this new filmmaker and art lover Raj Kishore Hota gives us gigantic hope and proves this quote that working hard is the real key to achieve success. Raj has got the social storytelling from his lineage. This young dynamic filmmaker producer has stepped in to produce a regional film the mountain hockey to inspire the generations about our national sport hockey.

Co-producer Subrajit Pradhan, a well-deserved highly qualified professional from Boudh Phulbani, Odisha. He completed his education from JNV India, later from Oxford University (UK). He financially and morally supports the youngsters who do innovative & creative stuff so that they don’t get stuck due to a paucity of funds. He has made his debut as a producer in the documentary film ‘The Mountain Hockey’.

Born in Titilagarh, Odisha, Jitendra Mishra is one of the few Indian film producers and promoters who have been able to create a benchmark in ‘Alternative methods of Film Production, Distribution & Promotion’ at international level. Committed towards meaningful cinema, Jitendra has already been associated with more than 110 films in various categories in different capacities. Awarded with several national & international awards, Jitendra Mishra has been elected President of world’s largest and oldest global network for children & youth media CIFEJ, formed under the auspices of UNICEF in 1955. He has been representing as the festival director of SIFFCY at CIFEJ. He has also been an active member of Cannes producers network and invited jury to more than 35 international film festivals so far.