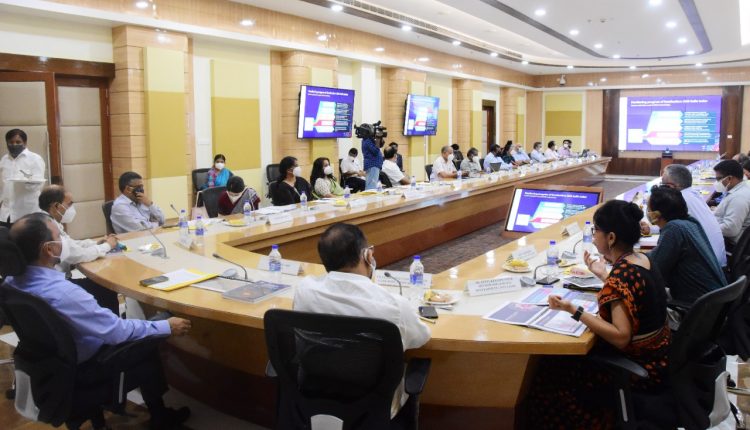 Bhubaneswar: Odisha’s performance in achieving the Sustainable Development Goals ( SDGs) has increased by ten score points in the year 2020 over the year 2019. This was known from the consultation meeting of State Government with NITI Aayog Advisory Team on SDG Index India 2020-21 held  under the Chairmanship of Chief Secretary Sri Suresh Chandra Mahapatra today  in  Lokseba Bhawan convention hall.

The presentation of SDG India Index Dashboard by Advisor Ms Sanyukta Samaddar showed that Odisha’s SDG performance score increased to 61 in the year 2020 from 51 in 2019. State ranked Number-1 in SDG -13 relating to action on combating climate change and its impacts. The State also ranked No-1 in SDG-14 relating to conservation and sustainability of the use of ocean, sea and marine resources.  Odisha also was ranked a frontrunner in achievement of nine number of SDG goals and an aspiring State in achievement of six number of SDG goals. State did well in pursuing the Goal-6 relating to clean water and sanitation; Goal-9 relating to investment promotion, innovation and industrial infrastructure; Goal-11 relating to making human settlements inclusive, safe and resilient; and, Goal-15 relating to protection, restoration and promotion of the sustainability of terrestrial eco-systems.

Considering the data presented in the meeting by NITI Aayog Team, Chief Secretary Sri Mohapatra emphasized on capturing of the ground level outcomes of all developmental interventions. Development Commissioner Sri Pradeep Kumar Jena said that Odisha’s performance in a number of areas was not properly reflected in the SDG Report of 2020. Chief Secretary Sri Mahapatra emphasized that the outcomes of the State schemes like MAMATA, Biju Swasthya Kalyan Yojana, universal health assurance, rural housing, urban housing, State food security scheme, State’s performance grading index ( PGI) score in education etc should also be taken into account while assessing the SDG performance of the State. Development Commissioner Sri Jena pointed out the “data discrepancy in performance of many indicators”.

Development Commissioner Sri Jena appraised that a separate PMU would be set up in Planning and Convergence department for planning, monitoring and coordination of the work plan for achievement of SDG goals in a time bound manner. Chief Secretary Sri Mahapatra directed to form seven Thematic Groups under the chairmanship of Additional Chief Secretaries and Principal Secretaries to spearhead the SDG vision and bring synergy in implementation of the work plan.

No Amarnath Yatra This Year Due To COVID