Bhubaneswar: Woman Fide Master from Odisha, Saina Salonika added another feather to her crown as she clinched an individual silver medal in the Asian Youth Chess Championship 2021.

The Tournament was organised by Asian Chess Federation in the online mode in Tornelo Platform from 22nd to 24th October 2021. Players from 21 Asian Countries had participated in the Youth Championship in different age categories starting from Under -8 to Under -18 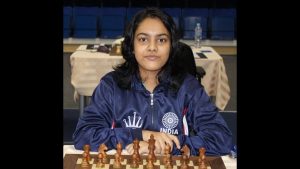 Saina bagged the Silver medal in the Under -18 Girl Category. In the nine (9) round tournament Saina won five games, drew three games, and lost one game from the eventual Champion.

Susmita Bhowmic of India bagged the Gold and Mohammadi Melika of Iran bagged the Bronze. Starting the tournament as 13th seed Saina bagged the Silver Medal by defeating 3 Vietnam Players, one Srilanka, and one Indian Player and drawing with two Iranian and one Indian player.

Till date, Saina had bagged 19 (Nineteen) International Medals and with this addition, her International Medal Tally increased to 20. Recipient of National Child Award for Exceptional Achievements from President of India Saina’s most memorable achievement was when she became World Champion in her age group in the year  2013 at All Ain, UAE.

Another 257 COVID-19 patients recover in Odisha

75 Top Destinations In India To Be Developed On…