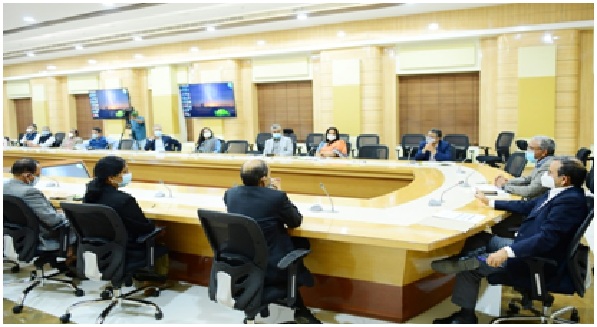 Bhubaneswar: Beating the Covid-19 crisis in different sectors of economy, Odisha has maintained upward trend in revenue generation because of Government’s dynamic financial management strategies. By November end of the current year, the total revenue collection has grown by 4% over the corresponding period of last financial year. This was known from all Secretaries meeting held under the Chairmanship of Chief Secretary Asit Tripathy in Convention center of Lokseba Bhawan today.

Development Commissioner Sri Suresh Chandra Mohapatra directed the departments to take regular review and monitoring of the OMBADC and DMF projects. Sri Mohapatra added, “the projects of around Rs. 20,000 cr are being implemented in major mineral bearing districts like Angul, Jajpur, Jharsuguda, Keonjhar, Koraput, Mayurbhanj, Rayagada, and Sundargarh. These projects would cater to many basic needs of the people.

Review showed, the revenue generation from both own tax and non-tax sources grew around 4%  by end of November, 2020  in comparison to the corresponding period of the last year.  The total revenue generation from both the sources by end of November, 2019 was around Rs. 28,402 cr which increased to Rs.29,411.29 cr during the current financial year. The total Non-tax revenue during the period grew by 23.29% during in current fiscal in comparison to the last fiscal year.  The total revenue generated from non-tax sources up to November, 2019 was Rs. 8485 cr which increased to around Rs.10,462  cr during corresponding period of the current year. On face of shutdowns and lockdowns, the total budget utilization by end of November, 2020 reached around Rs.60,000 cr in different infrastructure, social and agriculture & allied sectors.