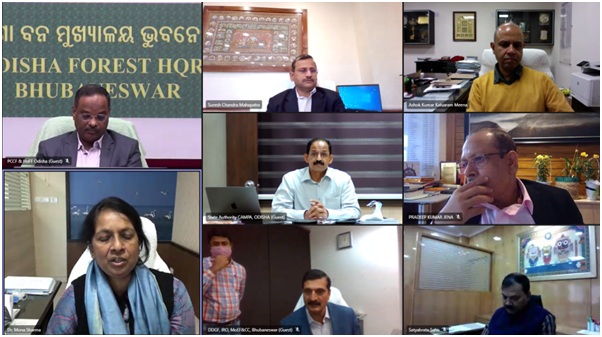 Bhubaneswar: The investment in Ama Jungle Yojana ( AJY) and Joint Forest Management ( JFM) under the leadership of Chief Minister Naveen Patnaik has yielded its dividend for Odisha with net increase of dense forest area by 243 sq kms during the last two years as per India State of Forest Report (ISFR)-2021.  Odisha also became first in the rate of increase in Mangrove forest, and third in Forest rich Tiger Reserve. This was known the State level Steering Committee Authority of CAMPA held under Chairmanship of Chief Secretary Suresh Chandra Mahapatra on digital mode from Lokseba Bhawan conference hall today wherein Additional Chief Secretary Dr Mona Sharma outlined the issues for discussion.

While complementing the department for these achievements, Chief Secretary Suresh Mahapatra directed the department to focus of the preventive fire protection. Mahapatra said, “As forest fire creates devastation to a large number of plant and animal life, the field officials must remain extremely vigilant to check the outbreak and spread of the fire.  He directed the DFOs and field level forest officers to have more fire-break lines in the forest and keep those clean for checking spread of the fire. They were also asked to ensure active involvement of the local community in this task.

Further, Mahaptra directed to raise the seedlings through WSHGs. It was decided that the WSHGs would grow 18-month-old seedlings which would be used for plantation under different forestry programmes. Department was also asked to increase the area under silk plantation as these trees supported the livelihood activities of many forest-dependent families.

Development Commissioner Pardeep Kumar Jena asked to have independent third party assessment of the investments done in the forestry sector and prepare a detailed report on the outcomes.

The Committee deliberated and approved the APO of around Rs.1241 cr under CAMPA for the year 2022-23. The principal activities of the APO included compensatory afforestation, wild life management, improvement of wild life habitat, new plantation, maintenance of old plantation, silvi cultural operation, silk plantation, soil and moisture conservation, forest conservation, fire protection, infrastructural support to front line workers, and application of IT and GIS methods in forest management. Secretary IT Manoj Kumar Mishra said that DFO offices would be connected through OSWAN network.

Principal Chief Conservator of the Forest, Sishir Kumar Ratho said that around 25,000 hect plantation would be done under AJY in the areas of 500 vana sanrakshyana samites with estimated investment of around Rs.69 cr. So far, 4600 VSSs were involved in different activities of afforestation and conservation. Sri Ratho also appraised that 18 month old seedlings would be raised by WSHGs in permanent nurseries of the department, and around Rs.98 cr would be invested in the activity. It was also decided that more nursery raising and afforetation activities would be taken up in convergence with MGNREGS.