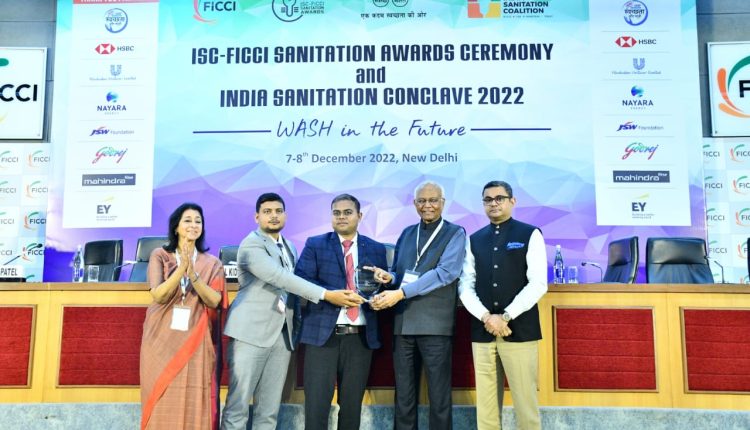 The ISC-FICCI Awards Ceremony and Conclave is an annual national event celebrating leaders, rising stars and organisations who are driving growth in the sanitation value chainfor achieving a “cleaner, healthier, safer, happier and a gender-equal India.” The Housing & Urban Development Department (H&UDD), Govt. of Odisha has been winning awards under various categories in the annual ISC-FICCI Awards Ceremony since 2019.

The award for Bhubaneswar was received by Smt. Sulochana Das, Mayor, BMCin the event along with team members. The “Women Changemaker in Sanitation” Award was received by Ms. Sasmita Barik along with Additional Secretary and Additional Mission Director SBM (Urban)H&UDD, Smt. Durgesh Nandini Sahoo. Both the awards are a recognition for the Odisha model of decentralised and community led sanitation.

BMC was awarded for its comprehensive implementation of FSSM across the value chain along with building an enabling environment by engaging multiple stakeholders and executing wide-ranging interventions in the Capital city.The FSSM model has focused on community-led demand generation, strong enforcement of regulations against illegal sludge disposal, innovative ways of cesspool vehicle service delivery, optimum utilisation of the Septage Treatment Plants (SeTPs)and city-wide communication campaign etc.

Twenty-six-year-old Ms.Sasmita Barik, a Swachha Sathi from Bhadrak was awarded for her active leadership and proactiveness in keeping the city clean and hygienic by spreading awareness among households on both Faecal Sludge and Septage Management (FSSM) and Solid Waste Management (SWM)and motivating citizens to adopt appropriate sanitation practices.

Odisha has been implementing a unique model of decentralised waste management with community partnership as a 5T initiative which has been lauded across various platforms.

Puri Srimandir Servitors, Staff To Be Barred From Smartphone Use Inside Temple From Jan 2023