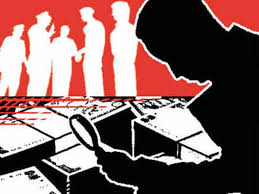 Bhubaneswar: Vigilance sleuths on Tuesday conducted raids on three persons across Odisha. However, the allegations of accumulating assets disproportionate to known sources of income remained the same against all the three persons.

A clerk, identified as Rohitash Bag, working at the RWSS office in Athmallik area of Angul also landed in vigilance net over DA charges and searches were conducted at his official residence in the government quarters and factories in Athmallik and Boudh.

Similarly, an Account Manager, Sudhir Nanda, also came under the scanner of the anti-corruption wing for accumulating assets disproportionate to his known sources of income. Sleuths conducted simultaneous raids at his office, residence and another house in Guripada.