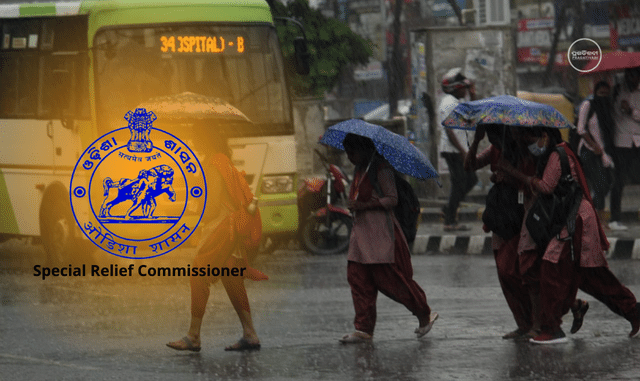 Bhubaneswar: The Odisha Special Relief Commissioner (SRC) on Saturday asked the Collectors of all districts issued Orange and Yellow warnings by the India Meteorological Department, to remain in readiness to meet any eventuality particularly water logging and landslide in hilly areas.

The Collectors have been asked to keep a constant vigil of low-lying areas and carry out dewatering wherever required including urban areas apart from closely monitoring the situation.

In its warning, the Odisha SRC has advised fishermen not to venture into the sea of Odisha coast and adjoining west-central and north-west Bay of Bengal during the next 24 hours. “Under the influence of Low Pressure Area over north-west Bay of Bengal off north Odisha-West Bengal coasts and strong monsoon flow, squally weather with gusty surface wind speed reaching 45-55 kmph very likely off Odisha coast and adjoining west-central and north-west BoB during next 24 hours,”

The SRC also directed the Collectors to strictly implement advice for fishermen and submit a report on damages if occurred due to heavy rainfall.

As per the Special Bulletin and Evening Weather Bulletin issued by the IMD today, “The Low Pressure Area over Northwest Bay of Bengal off north OdishaWest Bengal Coasts with the associated cyclonic circulation extending upto 7.6 km above mean sea level persists.”

The IMD has issued Orange Warning with a forecast of heavy to very heavy rainfall very likely at one or two places over the districts of Kalahandi, Kandhamal, Bolangir, Boudh, Sonepur, Bargarh, Ganjam, Khurda, and Puri. (valid up to 8.30 am of 17th July 2022).

Heavy rainfall is very likely to occur at one or two places over the districts of Malkangiri, Koraput, Nawarangpur, Kalahandi, Nuapada, Bolangir, Bargarh, Jharsuguda, Sundargarh, and Keonjhar.

Heavy rainfall is very likely to occur at one or two places over the districts Koraput, Rayagada, Gajapati, Kandhamal, Sundargarh, Keonjhar, and Mayurbhanj.