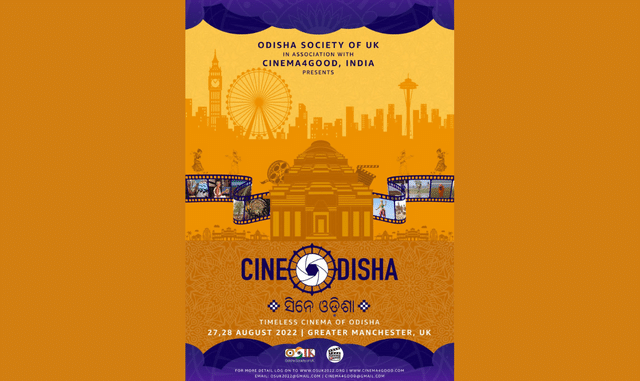 Manchester, UK: Odisha Society of United Kingdom (OSUK) – one of the biggest and oldest socio-cultural organizations of NROs is organizing their 43rd Annual Convention in Greater Manchester, UK on 27-28 Aug 2022. OSUK has collaborated with internationally acclaimed filmmaker, promoter and curator from Odisha Jitendra Mishra and his organization Cinema4good Pvt Ltd. to host the UK chapter of the one-of-a-kind film carnival CINEODISHA – Timeless cinema of Odisha during the prestigious annual convention this year.

CINEODISHA is a specially designed film platform dedicated to timeless cinema from Odisha. The platform intends to promote Odisha’s rich art, culture, language and heritage values through handpicked films from the state at international level. It celebrates the incredible journey of over eight decades of Odia cinema through multiple film shows including feature films, short films and documentaries, discussion forums, interactive sessions, workshops, award ceremonies and much more. CINEODISHA also pays tribute to the legends from Odia film Industry, at the same time explores global opportunities for aspiring filmmakers and stories from Odisha. CINEODISHA is designed and curated by Jitendra Mishra and the first edition of the unique event was hosted during the prestigious WORLD EXPO 2020 in Dubai by Odisha Samaj UAE in October 2021.

“It’s an unique opportunity for the Odias by born and heart of United Kingdom and Europe to get connected with the root through the lenses of CINEODISHA, furthermore the next generation who nourished here in UK and Europe have not felt the warmth of Odisha, its rich culture and traditions, occasion like this will educate them to know more and more about the treasured land of Odisha and devolve to the future generation” said Mr. Siba Ranjan Biswal, Secretary of the Odisha Society of UK, on this occasion.

Curator of Cine-Odisha Jitendra Mishra said “Odisha is a storied land of rich art, culture, values and cinema, this land has given birth to numerous great storytellers who have always made us proud through their incredible work at national and international platforms. At the same time, we have also several young talents in the film industry, in the state, with outstanding ideas that have high potential in global markets. This is an honest effort to promote path-breaking films and filmmakers from Odisha globally. We are grateful to Odisha Society of UK (OSUK) for their dedication, contribution and unconditional support towards this noble initiative and proud of our ongoing partnership”

OSUK was established 42 years ago as a voluntary organization looking after the social and cultural needs of Odias settled here in the United Kingdom. Odisha is a state in India with rich cultural heritage. The organization has grown from strength to strength and has evolved as a link between Odisha and UK. The vision is to promote Odia culture and ethos among people interested in Odisha that has been organizing social and cultural events regularly. The society encourages developmental activities and imbibing British and Odia cultures.

A flourishing community with members established in high echelon of British society in fields of Medicine, Engineering, Information Technology, Banking sector and Business. From time to time the organization have been contributing to local charities and hospices. Some of the members have performed on stage to raise money for local causes. The OSUK members have contributed generously whenever Odisha has been struck by natural calamities (e.g., Cyclones) or Covid-19. Some of the works include supporting schools and orphanages in Odisha.

Founder of Cinema4Good Pvt. Ltd., Jitendra Mishra is one of the few Indian film producers, promoters & curators born and brought up in Odisha. Committed towards meaningful cinema, Jitendra has already been associated with the production, distribution and promotion of more than 110 films in different categories on various capacities. ‘The Last Color’, ‘Buried Seeds’, ‘Desires of the Heart’ and ‘Human OAK’ are few among others. Awarded with several national and international awards, Jitendra has been an active member of the prestigious Cannes Producers Network since 2013 and has been selected International professional Jury for more than 50 leading international film festivals and forums as of now, he is the first and only Indian to be selected Jury of the prestigious European children’s film association for multiple times. Jitendra has been elected President of world’s oldest & largest media networks of media professionals working for children & youth – CIFEJ (International center of films from children & young people) that was formed under the auspices of UNESCO in 1955. CIFEJ has active members from more than 45 different countries. Jitendra has been representing as the festival director of SIFFCY-A Smile foundation initiative at CIFEJ since beginning. He has also designed and curated several international festivals & workshops for leading global organizations.