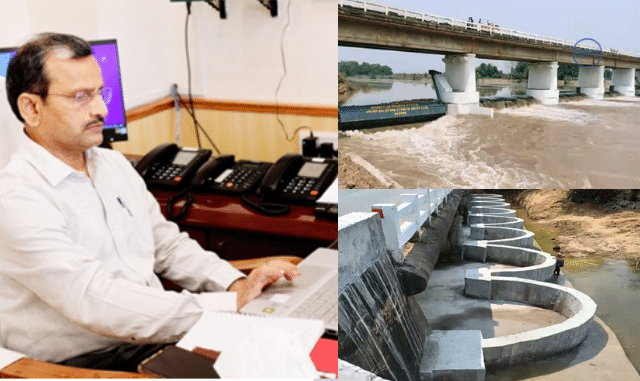 Bhubaneswar: Looking into the field-level positive impact of the bridge-cum-water wire structures during different field visits, Chief Secretary Suresh Chandra Mahapatra directed the Works department to scale up replication of the new technology throughout the State. He gave this direction in a high-level meeting held on digital mode from State Lokseba Bhawan last day wherein Principal Secretary, Works, V.V. Jadav outlined the technological and administrative facets for discussion.

Reviewing the water holding capacity of the bridge-cum-water-wire structures piloted in some districts, Chief Secretary Suresh Mahapatra said, “It is the most cost-effective technology with multiple utilities like groundwater recharge, raising the water level in river beds, irrigating the fertile land on both sides of the river, etc. In some places, riverfront parks can also be developed as a public utility”.

Development Commissioner Pradeep Kumar Jena said that the bridge-cum-water wires had also no adverse effect on usual flow of water in the concerned river or as it allowed the flow beyond 1.5 meter of height. Jena added that the structures could be done through two different methods viz. automated gate provision, or plain water-holding structure to the permissible height. Both the methods proved effective for our State.

The Chief Secretary directed the Works department to identify the high-level bridges on all roads under the departments of Rural Development and Works where such structure would be feasible. The department was asked to prepare a 3-year perspective plan for the purpose. The target was set to construct 1000 such bridge-cum-water wire structures in the coming three years.

Further, the Chief Secretary directed the department of water resources to supply the stocked water for irrigation on both sides of the nullahs and rivers where such structures were completed through lift-point pipes.  The horticulture department was asked to motivate the farmers for cultivation of vegetables and cash crops.  The water could also be used for drinking water projects wherever necessary.

Mahapatra also directed engineers of the Works department to complete the construction of water-wire structures in balance 37 bridges on a war footing. These structures would come up in the districts of Angul, Dhenkanal, Jajpur, Ganjam, Keonjhar, Kalahandi, Bolangir, and Sundargarh.

Special Secretary and Engineer in Chief, Works department Manoranjan Mishra appraised the cost involvement in construction of I meter water-wire comes around Rs.1.5 lakhs. It can hold water level of around 1000 cubic meter. Water-ware under a thirty-meter bridge could yield 30,000 cubic meter of water at a particular point of time. The structures also sustained the pressure of water during the monsoon.