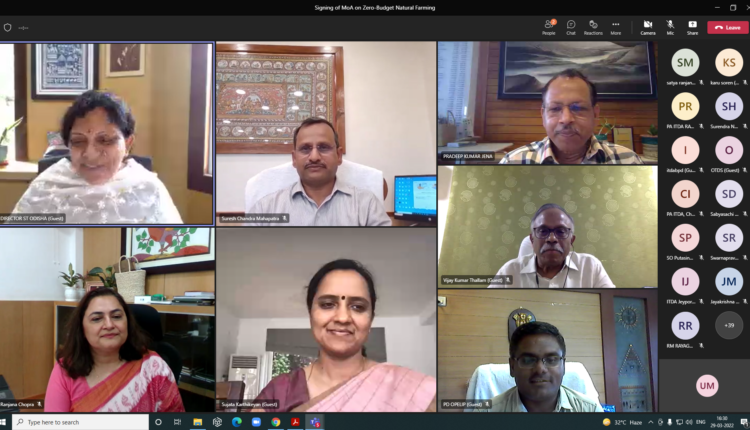 Bhubaneswar: In another significant step towards climate change action plan, the Odisha Government has come up with the programme for climate-resilient natural farming through Women Self Help Groups (WSHGs). A Memorandum of Agreement (MoA) to this effect was signed among the departments of Scheduled Tribe, Scheduled Caste and Minorities Development, Mission Shakti, and RYSS of Andhra Pradesh in a virtual meeting held under the Chairmanship of Chief Secretary Suresh Chandra Mahapatra from Lok Seba Bhawan.

Emphasising on the inevitability of natural farming for eco-biology and a sustainable future, Chief Secretary Suresh Mahapatra directed concerned departments to have robust “field level convergence for successful implementation of the programme”. He said, “Natural farming will get popular acceptance among the people, more particularly in tribal-dominated districts of Odisha as the method is quite compatible with the traditional patterns. The method while reducing the cost of production will also usher in production of safe and nutritious food items”.

Development Commissioner Pradeep Kumar Jena said, “Natural farming while changing the cropping scenario of Odisha will lead to a transformational change towards sustainability”. Sri Jena added, “As the popularity of non-toxic food items is in high demand, natural farming will fetch more income to WSHGs”

MoA was signed to start the programme in tribal-dominated areas in collaboration with RYSS of Andhra Pardesh who would provide knowledge support with its rich experience from Andhra Pradesh.

Outlining the basic objectives of the programme, Principal Secretary Smt Chopra said, “Natural farming transition programme will be implemented in tribal-dominated areas of 5 districts namely Sundargarh, Keonjhar, Mayurbhanj, Rayagada and Koraput”. The project would be rolled out in the operational area from the FY of 2022-23.

Smt Chopra added that the programme would be implemented in convergence with Mission Shakti department through the members of 13,500 WSHGs. A total area of around 3.15 lakh hectors of farm land would be taken up under the programme. Cluster approach would be adopted for implementation. Each cluster would consist of 50 WSHGs. An amount of around Rs.311.93 cr would be invested over five years in the programme.

Secretary Mission Shakti Smt Karthikeyan said “Women in tribal dominated areas of the State are quite conversant with agricultural practices. They form an integral part of the agricultural operations. They will be happy to carry forward the programme of natural farming considering its benefits both for their family in particular and society in general”.

Director ST, SC and Minority Development Smt Guha Poonam T Kumar said that the WSHGs would be trained to act as resource persons, and they would be assisted for crop diversification, initial preparation of bio-inputs, pre monsoon sowing, establishment of common facility centers for cleaning, grading, segregation, storage etc. Each WSHG would also be supported for developing Poshan Garden.